This is a guest post by Leslie Kramer from our partners at LearnVest. 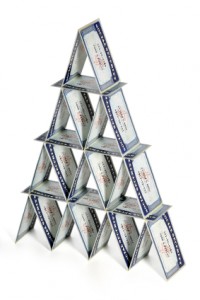 Social Security benefits used to be something that all tax-paying workers could count on. A portion of your pay would be automatically deducted from your paycheck, through the payroll tax, and in return you would reap the benefits of the program when it came time for you to retire.

For many decades the program worked well. “Today’s employees would raise the revenue to pay current retirees, and were assured that when their time to retire came, the current employees of the day would pay into the system to finance their retirement, ” explained Olivia S. Mitchell, director of the Pension Research Council at the Wharton School of the University of Pennsylvania.

Why is Social Security running out?

But due to the recent financial crisis and recession that ensued, as well as the current high unemployment rate and an aging Baby Boomer population, many of whom are expected to live way past age 65, there will soon be insufficient money coming in from payroll tax revenue to pay out Social Security benefits to expecting retirement recipients. This has many people worried about the overall future of the system and whether Social Security will be there for them, when it’s their turn to retire.

For Social Security to continue to exist as it does today, there will need to be a major overhaul in the program. Congress must figure out a way to reconcile the expected deficit in the program. Otherwise, it will have to resort to paying out less in benefits than it previously had.

That means that instead of relying on Social Security as a way to support their retirement, people will have to depend on their own savings and investments, says Ellen Derrick, certified financial planner™ with Learnvest Planning Services. “People need to ask themselves: ‘What can I do now to make sure I am protecting myself for the future, a future that may not include Social Security?’” she says.

According to forecasts made by the Social Security Board of Trustees, there should be enough money coming into the program to pay out only about three quarters of total expected benefits starting in the year 2032. “So if you were to receive $1, 000 a month, it is projected that you would only receive $750 a month instead, ” says Derrick. “Those benefits should be intact through the year 2086, ” she notes.

Part of the reason this may occur: “The law says that the Social Security administration can only pay benefits up to the amount of revenue that it has, so if it’s insufficient, the government will have to figure out new solutions if it does not want to cut payments, ” explains Mitchell. And that will take a big change in policy.

How you can prepare yourself

So what can you do now to prepare yourself for the possibility that the full amount of Social Security benefits won’t be there when it’s your time to retire?

The simplest answer is to keep working. For those people already retired or close to retiring, you don’t need to worry— your benefits are secured. “But if you’re 10 years away from retirement, it’s time to buckle down, ” says Derrick. As a financial planner, she tells her clients who are age 55 and younger that they should not even include Social Security in their retirement planning calculations. “If you do get it, it will most likely be a smaller amount than what you are currently being promised, ” she says.

Many financial planners are advising people to keep working and retire later than they may have originally planned. “It’s helpful to delay retirement until as late as possible, ” says Mitchell. In fact, there are already added benefits built into the Social Security system if you defer claiming benefits until age 70 instead of age 62. “Your monthly benefit could go up by as much as 76%, ” she says. It is important to realize that the age you take your social security benefit can vary from person to person. This is a topic you should visit with your financial professional to select the time that is right for you.

How much you’ll need to save

Mitchell also recommends that people start saving more while they are still working, and spend less. The recommended percentage of one’s paycheck that people should invest in a retirement fund varies greatly according to age and circumstances, but many financial planners advocate putting in between 10% and 20%. The more you can save, the better, Mitchell advises. Another factor is that many people today are living a lot longer than they used to. “Longevity is increasing, and it is expected that people may soon start living to over 100, ” she notes. That means many more years of savings will be needed over the course of your lifetime.

Another tip: Everyone who is offered a 401(k) retirement plan from his or her employer, with a contribution-matching program, should take it. It’s free money! If you’re self-employed, setting up a traditional IRA or Roth IRA account or an individual 401(k) account is key. If possible, you should contribute the maximum amount those plans allow each year. “Even if you are a stay-at-home mom, you can set up an IRA in your name and deposit income coming in from your spouse, ” Derrick advises.

What else you can do to stay on track

Staying healthy is another way to protect yourself now for later on in life. “You should be investing in your mental and physical health, because that is your capital, ” Mitchell says. Good health will help you be able to work longer and hopefully reduce medical expenses when you are in your retirement years.

She also suggests that people start to think about their social capital, which includes friends, neighbors, community and family. “In the old days, when parents would grow old, they would move in with their kids, but that has changed, ” Mitchell says. Today, if you have friends and family who can help you, it may allow you to remain out of a nursing home and in your own home longer, which will be less expensive later in life, ” she explains.

Derrick also recommends that workers check to see if their retirement account is on track for where they thought it would be, at least once a year. “If it’s not, you should adjust your contributions, especially if you get a raise or a new job that could make a significant difference in your salary, ” she says. At times you may find that you have to rearrange your savings rate to take care of a child’s needs or to set up a college fund. “But at the same time, you don’t want to sacrifice your own retirement; you want to weigh those priorities, ” says Derrick, and avoid these top retirement mistakes.

The secret of retirement savings: You can’t make up for lost time

Reboot your career: How to do your dream job in retirement

7 Responses to “Will Social Security be gone before I retire?”