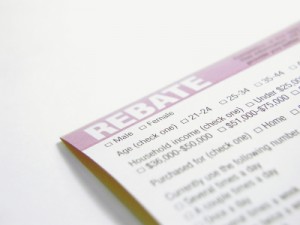 Time for a mini-rant… Back in August, we upgraded our oldest son’s cell phone and added a line for our second oldest. The phones each came with a $50 mail-in rebate, so $100 total. Not exactly chump change, and certainly enough to jump through all of the required hoops.

I did the paperwork, made copies, and sent off the rebate forms (along with all the other required stuff) and have been waiting patiently for the rebates to show up.

About a week ago, my wife brought me a postcard from AT&T saying that our rebate had been denied because there was “no active service at the time of verification.” Hmmm. Really? Because our kids have been using their phones and we’ve been paying the bills.

So earlier today I called the number on the postcard and, after waiting on hold, learned that they had entered the wrong phone number for one of the phones, hence the rejection. The other one was okay. In fact, the proverbial check is in the mail.

Had we tossed out that non-descript postcard, or lost it before I had gotten around to calling, we would’ve been out $50. And that’s exactly what they’re counting on when they offer a mail-in (vs. instant) rebate.

For every person that doesn’t send in the form, does it wrong, or fails to follow up on the rebate center’s mistakes, AT&T saves $50.

11 Responses to “Why I Hate Mail-In Rebates”