If you had to pick a single city in the U.S. epitomizing America’s might as an industrial power, Detroit would be hard to beat. That’s right, the Detroit that just declared the largest municipal bankruptcy in American history.

If your first reaction was to shrug and say something like,  “Too bad. Thank goodness it doesn’t involve us. Please pass the salt, “ you would be one of many.

You would also be wrong.

First off, don’t be misled by media headlines. They make it sound like someone is going to have to kiss $20 billion of debt goodbye. Wrong. No government body ever has enough money to repay lump sum debt, and nobody expects that to happen in this case.

It’s about payments,  it’s always about payments. Every bankruptcy stems from a single problem: you’re unable to make your payments from your income. Here’s how that looks in Detroit: 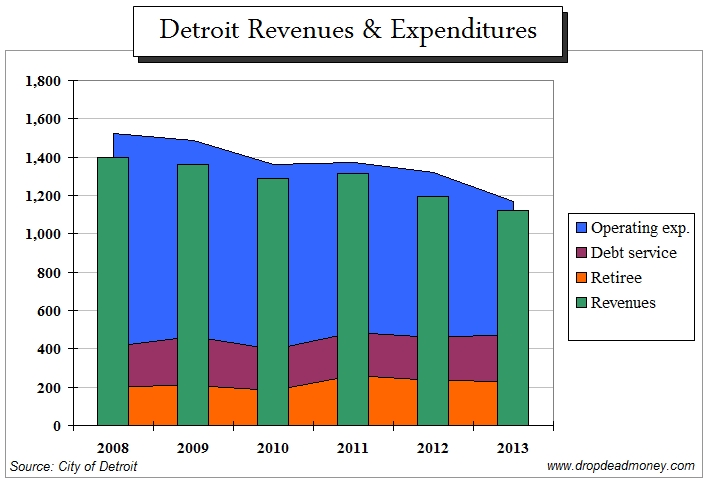 The picture clearly shows how the city’s revenues have declined, and how they have cut operating expenditures (blue) to try and live within their means. You can see the deficit every year as the green bar of revenue just doesn’t quite make it to the top.

To close that gap they borrow money. Every year that adds more debt and, of course, debt service. That’s why the purple band keeps growing, not shrinking. Same with the orange band: payments to retirees.

The solution to any bankruptcy of this kind is a trip to the barber. That’s right: “Instead of getting $100, 000 a month in payment on what the city owes you, Mr. Bondholder, you will now please be happy to accept $90, 000 per month.” That’s called a 10 percent haircut. Look, it won’t kill you, they say, and your option is getting nothing. That’s how business gets done on Wall Street. It’s been done hundreds of times and nobody has lost their job or gotten killed (presumably?). The key, though, is that everyone shares equally in the pain; no privileged parties get exempted from the barber shop party.

That’s where it gets a little messy. The purple band crowd wants to add the orange band to the line at the barbershop. At one level it makes some sense. Looking at the chart above, you can see that if the orange and purple bands each take a haircut of some level, total expenditures will also drop and the green columns of revenue will cover it all.

Haircuts may be fine for someone on Wall Street earning a quarter of a million dollars a year, and who’s not talking about his own money. It’s a different matter entirely for a bus driver or fireman whose means of living is on the line. No surprise, then, that all parties representing Detroit workers and retirees are screaming like banshees over the notion of taking a haircut.

Detroit is not the only government body faced with this problem, and it is about to be joined by many other bodies. Detroit’s pension liabilities were incurred at a time when everyone assumed the city would remain the same size or grow, providing ample resources to take care of those who spent their careers in the service of those who lived there. But, while America’s population doubled, Detroit’s fell by more than half. 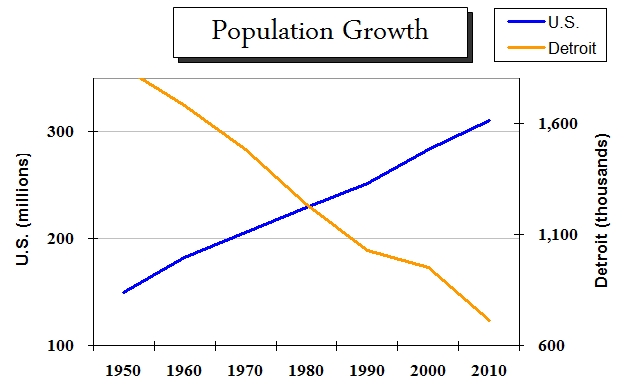 Now, who will pay for the pensions of retirees? Nobody disputes that they’re entitled to their pensions. But, at the same time, nobody can say who has to pay for them.

The key word in this drama is: unfunded.

What’s an unfunded pension? The answer is best seen in the opposite: a funded pension. That’s a chunk of money set aside and invested in stocks and bonds and things to yield enough interest that someone’s pension can be paid from the combination of interest and a gradual withdrawal of the principal.

An unfunded pension amounts to nothing more than a promise that runs something like this: “Hey, come and work for us. We’ll pay you $x for now and when you retire, we’ll continue paying you $y. We just assume there will be enough ratepayers (or customers in the case of a corporation) to keep paying you. We’re making this promise to you, but, really, that’s all it is. As long as we’re able to deliver on the promise, we’re good for it, but should the day arrive when we can’t, well, best of luck to ya.”

That last sentence is the one nobody ever spoke, mainly because nobody ever even thought it. That, of course, is because we never question the basic assumption underlying our promises: that “everything will keep growing like it has in the past.”

Warren Buffett made an observation in a different context: it’s when the tide goes out that you see who all was swimming naked. And any unfunded pension plan is an exercise in naked swimming.

Why is this important to you?

Detroit is a prototype for another, much bigger, unfunded pension liability we face: Social Security.

For decades the Federal Government has taken money from you under the guise that it’s money for your pension, which they call Social Security. The way it’s labeled and taxed (flat tax) makes it look and feel like they’re creating a funded pension for you. They’re not. And so their promise to you is like the one stated above: “As long as we can, we’ll pay you a pension every month. The amount is calculated from how much we took from your pay while you worked, but in reality it’s based on how much we can coerce from whomever is paying income taxes at the time. And, should the day arrive when there’s not enough money to pay your pension, then, well, sorry, you’re just going to have to go without.”

There is no easy answer. Detroit’s pensioners say they’re entitled to receive what they were promised. However, what if there’s not enough money to pay for those promises made in an earlier time when things were different? Blood from turnips is one picture (i.e., nothing), but blood in the streets is another. Sound a little dramatic? Those who are old enough will remember a time, not so long ago, when riots, looting and bloodshed,  in America, made the nightly news almost every night. The issues were different: first race, then a war, but people feeling betrayed taking to the streets to destroy property and shed blood, here in this civilized country, is not as far-fetched as it may seem.

What should you do?

1. Understand whether any promises of pensions made to you are funded or unfunded.

2. Question whether those who made unfunded promises to you will be able to deliver. You cannot blindly stake your financial future on any promises made by corporations or governments, because they may not be able (or even around) to deliver on them.

3. Save and invest. You may think it’s too late and it may not be enough. But it will be more than you might get from “them.” And for sure it’s more than if you do nothing. The earlier you start, the better.

4. Become proactive. If your promises were made by a corporation and they have a pension plan, get on the board or committee overseeing those investments. Yes, it takes time and yes, there will be politics. But if you’re involved you may be able to affect the outcome, instead of being a blindsided victim of something that could have been done better. If it’s a government body, get involved with that, too.

The reason politicians get away with lining their own pockets is because voters let them. Whenever and wherever voters get involved, things always start going their way.

How funded, or unfunded, is your future?

9 Responses to “Why Detroit’s bankruptcy affects you”