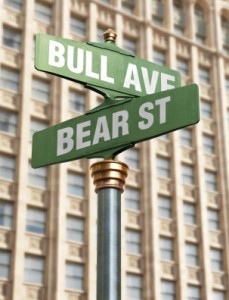 And yet, here we are. The Dow has just set an all-time high (though some have rightly pointed out that this ignores the effects of inflation) and the S&P 500 is knocking on the door.

But still, things are looking up. Which begs the question… How long can it last?

Well, the latest issue of Money Magazine had a three page spread highlighting the reasons that the bull may keep running. This, in itself, may be a sign that things have run their course. While we still haven’t (imho) reached euphoria, the masses are starting to buy into the idea that the market’s recovery is real.

Money’s arguments in favor of a continued bull market focused on a number of factors, including:

Of course, whether the bull will continue to run is anybody’s guess. Perhaps we’ll continue on to even greater heights. Or maybe, as many technical analysts fear, we’ve reached a dreaded triple top and the bottom is about to drop out.

Either way, we’re sticking to our plan.

4 Responses to “When Will the Bull Market End?”