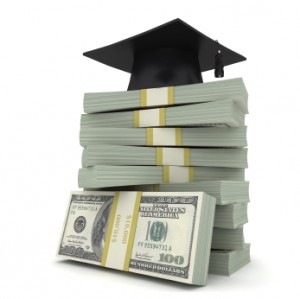 I paid off the tiny amount of undergraduate student loans I took out quickly — within a few years of graduating. And then I went to business school, where we all mutually assume we’ll make crazy money afterward, so who cares about a few student loans? And at first, I was on plan, and started paying back $400 or $500 or $800 whatever it was each month. I honestly don’t remember.

And then, I had a major life upheaval, over a man. I moved back to Portland; got a good job that didn’t pay quite so well; I fell (back?) in love with an old high school friend and began having children, as I’d always dreamed, at age 29. According to plan.

This second plan, though, missed an important element from the first plan: business school-graduate pay. With the distraction from the children and the series of creative, startup, sometimes part-time jobs I found, the income just wasn’t there for this $400 or $500 or $800 a month student loan payment.

I began a series of deferrals, until I’d used up all my available unemployment/hardship/poor me delays. My husband, an Army Reservist, was now deployed overseas and I was going through an extremely challenging period in my oldest son’s life.

Finding an office job paying b-school money might have been possible, but it wouldn’t work for me. I was so lucky that, at almost this exact time, income-based repayment and 25-year loan forgiveness began being promoted more by student loan servicers.

Though it was created in 2007, income-based repayment was at first badly promoted and hard to access. The law I utilized when I first qualified last year caps payments at 15% of income; extends the payment period up to 25 years; and forgives any debt remaining after 25 years.

A version President Obama unveiled in late 2011 will, starting (according to reports; the people at the Federal student loan information center don’t know when) sometime this year, lower monthly payments to 10% of income and forgive the debt after 20 years. You can find out if you qualify by using the calculator here (you’ll need your Adjusted Gross Income from 2011; your total student loan amount for eligible loans; and your interest rate).

Accrued interest could be the killer, however. My considerable business-school loans are accruing interest at around $300 a month. Thanks to my large family and my husband’s war zone income — most of which is non-taxable and thus doesn’t count in AGI — my payment is zero.

For another 22 months, great. After that, I’ll have to make some big decisions. If we continue to make less than the AGI cut-off for our family of $40, 000 a year, I’ll be accruing interest in highly scary quantities; $3, 600 to $4, 000 a year, and that would only grow as the years of poor earning went on.

Great: if you don’t plan to use it more than four years

According to Mark Kantrowitz, only 1.25% of borrowers with eligible student loans are currently using the government’s income-based repayment plan. But as much as 10% might “yield a financial benefit” from this plan. Given an average of about $20, 000 in student loans — which would accrue around $100-$125 a month in interest after the first three years — I can see his point, but only for three years.

After this, you’d have to be in a career in which you planned to always make about the income level that qualified you for a zero or close-to-zero payment for the program to make sense (unless, of course, you were in a public-sector job and could eventually qualify for tax-free forgiveness). Sometime before 25 years are up (or 20, if that Pay as You Earn plan goes into effect), you’d otherwise be stuck with a ballooned debt that you’d have to figure out a way to pay off quickly.

And once that forgiveness period was up, you’d be responsible for taxes on the forgiven amount; which, if it’s indeed grown with compound interest for 17 years, would be quite some tax bill. Many financial experts point out this is in future dollars, and thus should be discounted, but when the future arrives and you’re still making so little you qualify for little-to-no payment, I’m going to guess that it will be more future dollars than you have.

IBR is only sensible for stagnant incomes and the very disciplined

Of course, you’re going to tell me that, if you work in a job with stagnant pay (shouldn’t be too hard these days!) save the amount you would have paid for student loans and instead put it in a savings account (or, even better, invested it at an assumed 8-10% return), you could live frugally for the next few decades and have far more than enough to pay your tax bill when you finally made it to forgiveness time. True!

But so few of us are quite that disciplined. If you, as Scott Gerber optimistically suggests, plan to put the student loan payment money into a new business, super duper! Maybe it will grow to a huge business and you’ll have so much more money to pay off your loans (and you’ll be a Job Creator). I hope that will be true.

For now, I’m going to hope that, by the time my three years of IBR interest freedom is up, my kids will all be doing beautifully in school and I’ll be making four times what I’m making now — able to pay off the student loans quickly and, after another decade, move on to the debt-free portion of my life. Either that or convince the government that writers and other artists should be counted as public service employees and get the tax-free forgiveness too. Are you with me?

3 Responses to “When to Use Income Based Repayment”