Are you curious to know how Warren Buffett succeeded so spectacularly at his investing? I am, so I’m working my way through his (thick) authorized biography. If there’s anything that matches his investing prowess, it’s his readiness to share his secrets with all who are interested. By now you’ve probably read tens of posts and articles listing his secrets of success.

What I’m after, though, is “the one thing” — the cornerstone, if you will, of his success strategy. The way he tells it, he got it from a library book he checked out when he was about 10 years of age. That book contained a lesson that set the course not just of his investing career, but of his entire life.

Ten times. That’s how much your money grows when you invest. You may have heard that before, and see it as an interesting classroom concept. But has it changed your life and everything you do? It’s changed Mr. Buffett’s life and he parlayed it into billions.

What Warren Buffett did was turn that dry classroom concept into a single number. In his case, the number was 10, as in “if I invest $1 now it becomes $10 in 25 years.”

How did he use this magic number? Every time he saw something he wanted to buy, he multiplied its price by 10, and then asked himself again if he still wanted it.

That’s where he got a portion of the money he invested. When he saw a suit, it was the same thing: Do I really need another suit for a “real” cost of $10, 000? Probably not. How nice is a steak dinner for two when the price jumps to $2, 000? Not quite as nice anymore.

Rather than spend the money, he invested it — even if the amount was small.

There are people who are frugal because they received some emotional or psychological knock along the way. He’s not one of them, and this is not about simply being frugal. He was frugal in order to obtain money to invest so he could tap into the miracle of compounding.

The miracle of compounding takes ordinary amounts and turns them into extraordinary returns.

You or I are probably never going to do as well as he did, because he turned investing into a career, and not all of us are that good at it, or going to make that our careers.

But that concept,  a lifestyle based around a number, will make you a lot of money if you follow it.

Warren Buffett picked his number from a book, and that number used 25 years. Life has changed a lot since then. You can expect to live well into your 80s. If you’re around 30 now, that means you have more than 50 years ahead of you.

So, back to the question: What’s your number? Warren Buffett used 10, for 25 years. You’d think that for 50 years, the number would be double, right? You’d be wrong. 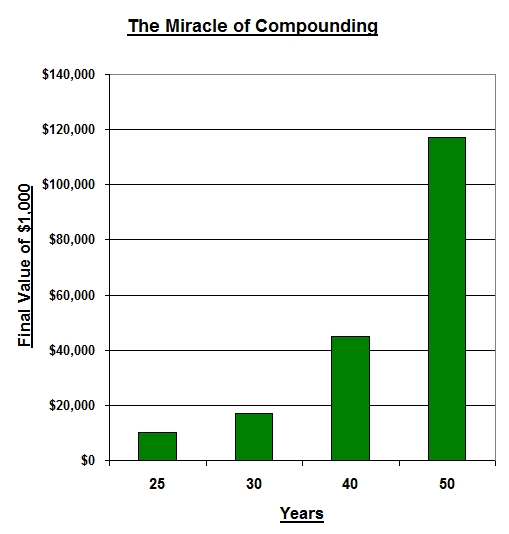 Remember, we’re talking about investing only $1, 000 without adding a dime to it ever after. As time goes by, your return grows exponentially, not linearly. That means the last 10 years make you more than double the previous 10 years. Ten years is 10 years, but the amount you make is more than double.

How do you use that number?

If you’re like most people, investing is a challenge because you don’t have a few spare thousands lying around to go and compound like rabbits in springtime. In order to tap into the miracle of compounding, you need to free up some dollars to invest — because only through investing will you gain those returns.

The miracle of compounding depends on time more than anything else. You might be tempted to think that waiting a year or two won’t make that much difference. Look at that chart again. Any delay takes away from the end of that curve, not the beginning. And it’s the end that’s the juiciest.

So the sooner you start, the better, even if it’s small.

Oh, and if you thought you’re too old to start now, think again: even if you’re 60, you probably still have another 25 years ahead of you. That long. So tapping into the miracle of compounding is for you, too.

So how do you use your number to find money to invest?

Answer: Think like Mr. Buffett. That party you plan this weekend? The one you thought was going to cost only like 30 bucks? Think like Warren: that party’s true cost is $3, 000. Do you want to spend $3, 000 on a party?

That cool T-shirt you’re eyeing for “only” $20? Do you still want it now that you know its true cost is $2, 000? Warren Buffett used that reasoning for every purchase, and that’s how it became a lifestyle. People still laugh at him because he lives such a plain life by the standards of the other rich and famous people, but they don’t laugh at his billions.

This is not about denial or being a social deviant. It’s about grasping a mind-set that will lead you to success and independence. Do you want to end up having to clear tables at McDonald’s? Because that’s the only job anybody will offer you when you’re over 70. Or do you want to have to move in with your kids, because you can’t afford your own rent? And have your grandkids keep asking you when you’re going to leave? Isn’t it nicer not to be dependent on others?

You have more control over your life than you might have thought. Start with using your number.

11 Responses to “What’s your number?”