If you didn’t hear the news,  the America’s Cup was run in San Francisco recently.

The way the sailboaters and media make it sound, the America’s Cup pits one nation’s best against the best of another nation to determine who’s the champion of the world. That, as it turns out, is not exactly the truth. If you Google the America’s Cup, you’ll quickly learn it’s really only a contest between two billionaires from different countries who have the chutzpah to claim they represent their country. One article in particular summed the essence of the contest thus: “…in many ways, the race is perhaps best understood as a pissing contest between the world’s richest men.” The truth is their country hardly knows these teams exist, and Team USA had only one American on its boat. But that doesn’t change the fact that the contest was interesting, especially seeing two tons of boat and crew being lifted out of the water by the wind.

The America’s Cup is a series of races between two sailboats, and the first one to score 9 wins gets the Cup. The challenger, Emirates Team New Zealand, led the contest by 8 wins to 1, and needed only one more win to clinch the championship. The defender, Oracle Team USA, to retain the Cup, had to win 8 races in a row. Given that they had lost so many races, it’s easy to see how impossible that seemed.

Well, they pulled it off.

When all seemed lost, Oracle Team USA reeled off eight victories in a row and pulled off one of the greatest “come from behinds” in sports history. 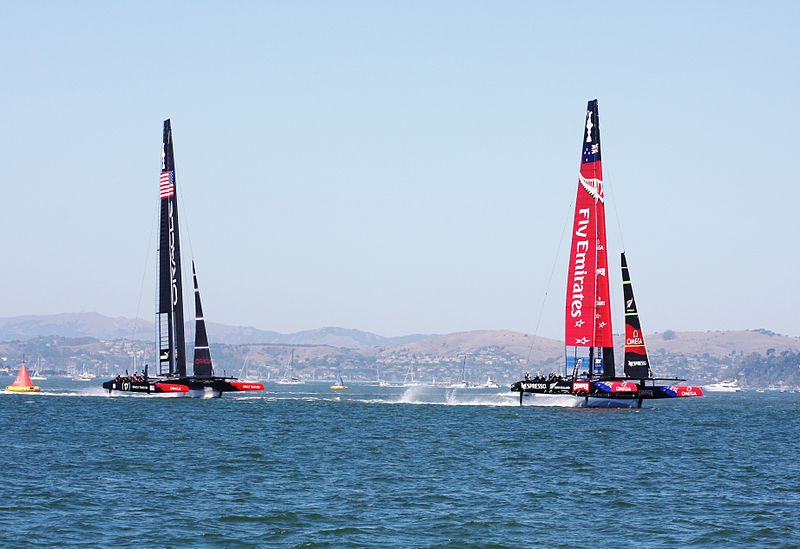 Okay, this blog is about money, so what’s the connection between the America’s Cup and your money? No, it’s not that you, too, can compete in this race once you’re worth a billion or two.

Here’s the connection: It’s never over until it’s over, and victory comes to those who stay at it.

You might feel that you’re down 8-1 when you look at your finances and your future. You’re not able to put anything away for a rainy day, because every day is rainy already. When you think about your golden years, the only thing you see is the total lack of gold. You don’t have anything saved. You know you have to invest; but when you see how little you can put aside, your heart just sinks. The race that is life is over and you’re not even halfway yet.

Just like Larry Ellison’s Oracle team came back and won the America’s Cup, you too can snatch victory from the jaws of the defeat you’re so sure of.

The key to success is understanding that what you see at this moment does not represent the final outcome. There is still a lot of time to change things. Even if you’re fifty, you still have at least another twenty years to grasp a few key facts and put them to use.

1. The rules change from time to time. Everyone has a choice when that happens: You can adapt to the changed rules, or you can complain that they’re unfair, untimely and/or unjust. Those who adapt find a way to get ahead, while those who complain get left behind. The complaints may be as valid as all get-out, but the complainers get left behind regardless. They may (and usually do) blame others for being left behind, but the only thing that changes their outcome is adapting.

2. Your abilities and circumstances change. When you start out, you only make “young money.” Everyone knows how that feels: Just when your need is the highest (because you have to set yourself up) your income is at its lowest. However, as you gain experience and knowledge, your income rises. It may not feel like that, but it does. Things which seemed impossible gradually become available to you. That gradual thing, that’s the deceptive part. If you’re unaware of it, you fall victim to the common curse of lifestyle inflation. However, if you pay attention, you understand that your abilities, and earnings, improve over time and with that the ability to do something about your future. But that has to be something intentional. It doesn’t happen by itself.

3. You get smarter. Again it’s one of life’s ironies that when you need wisdom the most, you’re most inclined to reject advice offered by boring dinosaurs and fuddy-duddies who seem bent on spoiling fun more than anything else. As time passes, though, something amazing happens — those fuddy-duddies become smarter and their counsel makes more and more sense. Learn early and often, especially from those whose lives indicate they’ve figured things out.

4. You don’t have to be perfect. Many people don’t start because they look around at others and tell themselves, “I could never do that well, so what’s the point?” I’ve spoken to many people who have done well for themselves, and from those conversations I’ve learned two things:

Investing in some form is the cornerstone of any plan for any financial future.

Doing something, anything, will achieve infinitely more than doing nothing. The good news is that success, however it’s defined, comes to those who do something and keep at it, improving as they go. Team USA did, and now they have a nice cup to display (even if it’s in some fancy club accessible only to people with lots of money).

It’s like the old Nike commercial: Just Do It.