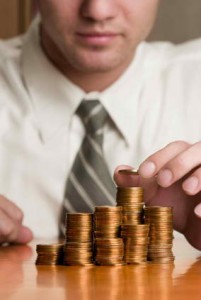 One of the greatest things that ever happened to me was being born of Depression-era parents. Because both could so clearly recall the deprivations of the 1930s, I began hearing about the need to save early. Very early.

How early? My folks rarely missed a chance to pontificate on the merits of interest-bearing passbook savings accounts while pinning me into a fresh diaper.

Their message was that you saved for all the expected things, like taxes, down payments on a house, a new car, and college educations. What’s more, you saved for the unexpected developments, things like a sudden leak in the roof, the untimely demise of a furnace or the surprise need for a root canal.

But because they believed in truth, justice, and the American way, they weren’t well equipped to school me in a third, more insidious, reason to save.

That third reason comes about when all signs point to you being able to finally blow some hard-earned cash. But the justification for doing so is the very reason you should be — that’s right — saving, saving, and saving some more.

Confused? Read on. I think you’ll not only see my point, but recall events in your own lives and careers paralleling those I’m about to describe.

I’ve got this friend we’ll call “Ned.” I’ve known him for years, and can vouch for the fact he’s smart, talented, industrious, all the traits you’d most want in an employee. Married, burdened with a mortgage and the father of two kids rapidly approaching college age, he decided to shutter the business he’d helmed for a number of years and take a full-time job for the bennies that would accrue.

Drawing on experience that included earlier stints as both an employee, and as the boss of his own shop, he quickly proved himself an outstanding team player in virtually every task he touched. And indeed, his performance reviews reflected that status, identifying him as a real up-and-comer in the enterprise.

Then came a true watershed moment. A colleague within his organization left on a sabbatical, and Ned was tabbed to cover both his own responsibilities and the sales functions of the departing co-worker. The following weeks proved pivotal.

Ned not only shouldered his own duties with his customary aplomb, but injected fresh new insights into the sales position. Under Ned’s stewardship, sales and revenues climbed to levels never before tallied by the firm.

That’s when Ned’s boss “got it.” Not only was Ned good, he was too good. Any more brilliance from him, and she might be leapfrogged on the corporate ladder by the very man whose job performance she graded.

When Ned’s next job review came around, he had reason to expect an even more glowing appraisal. Instead, his boss tore into him, ripping his decision-making skills and marginalizing his contributions to the company. And from all accounts she managed to pull it off with a straight face.

Maybe she thought he’d get mad and quit, but that didn’t happen. So she began hinting, first subtly and then more baldly, that Ned should look elsewhere for employment.

Ned finally was forced out, his boss kept her post and large paycheck, and the firm lost a vital contributor. Karma being what it is, Ned may actually do better financially in his next job. But this unexpected turn of events cost him thousands of bucks in benefits and the expense and hassle of a job search.

Are the events I just recounted unprecedented? Hell, no. They happen every day, and have happened every day since the dawn of time, in every kind of organization worldwide. An earnest, hard-working and talented employee shows too much ability for the boss’s comfort, becomes a threat to the big kahuna’s continued employability, and the up-and-comer is out. The company sags back to its former mediocrity, and a talented rising star is now the sadder and wiser.

One of the most telling, and side-splitting, examples of this phenomenon played out in a big city with which I have more than a passing acquaintance.

The former mayor anointed a new schools chief we’ll call “Paul.” Paul hit the ground running and got the very results the mayor sought. Then he got results even better than the mayor expected. Standardized test scores soared, and bad schools began turning out grads just shy of Rhodes Scholar status. The press noticed and began slobbering over Paul’s phenomenal achievements, predicting much, much bigger roles in city government could be his reward.

The mayor then called a press conference. Did he say Paul was the greatest schools chief in city history? Did he offer Paul a new, better position? Did he suggest Paul could stride atop the surface of a nearby Great Lake?

No. As press corps members snickered up their sleeves, and even wise-to-the world four-year-olds rolled their eyes, he fired Paul’s ass, right out of town.

I can’t recall the flimsy reason given for the firing, but it was set forth with a straight face, as if the mayor figured no one would see through his conceit. What was as transparent as the plate glass windows on a downtown department store was that Mr. Mayor viewed Paul as a potential threat to his next re-election.

We can debate at length the crippling effect this phenomenon has on organizational effectiveness at every strata of business and society. But for our purposes here, the takeaway should be there’s no limit to the reasons to save.

It’s not just the expected and unexpected reasons my parents enumerated as they shoved a pacifier into my mouth, but a third category that should especially concern you if you’re a highly capable employee with a less-than-secure boss.

13 Responses to “What a Threat Begets”