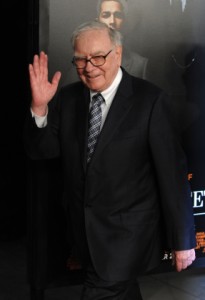 By now I’m sure you’ve heard about Warren Buffett paying a lower tax rate than his secretary. In fact, this was inspiration for the so-called Buffett Rule that was proposed back in 2011.

Under the Buffett Rule, a 30% minimum tax rate would be imposed on individuals earning more than a million dollars per year. That never happened, but the Bush era tax cuts were allowed to expire for high income earners as part of the fiscal cliff negotiations.

As I noted in my earlier post about the fiscal cliff deal, this 20% rate won’t apply to all capital gains and qualified dividends. Rather, it will just apply to the amounts that take a taxpayers income above the $400k/$450k threshold.

Unrelated to the fiscal cliff deal, high income households will also pay an extra 3.8% Medicare surcharge on net investment income to the extent that it pushes their total income above $200k/$250k for single/joint filers.

So surely Buffett is no longer paying taxes at a lower rate than his secretary, right? Well… No.

Because Buffett’s income is largely from investments, that top 39.6% tax bracket doesn’t really come into play. Yes, he’ll be paying more on his capital gains and qualified dividends, but that’s not enough to make up the difference.

And don’t forget the expiration of the payroll tax cut. This affects anyone with earned income, but it hits those in lower income brackets hardest. This is because Social Security taxes are capped.

This year, the Security Security portion of the payroll tax is only due on the first $113, 700 of gross compensation. Beyond that, there’s no payroll tax obligation and thus no added hit thanks to the expiration of the cut.

According to a recent interview on CNBC, Buffett says that the net result is that “It’ll be closer [than it was in year’s past], but I’ll probably be the lowest paying taxpayer in the office.”