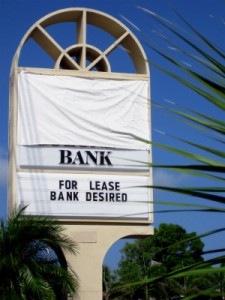 This spring, my bank got eaten. I was very upset.

By eaten, I mean taken over by another bank. I shouldn’t have been shocked that this kind of thing happened – after all, I spent over twenty years in the investment business, so I saw plenty of merger and acquisition activity. Plus, I’ve spent the past few years writing extensively about the banking industry, so I know what goes on.

But did it have to be my bank?

I was quite fond of my bank and, at 28 years, it was the longest business relationship of my life. Plus, the reason for the buyout was kind of galling: the parent company had missed earnings because of setbacks in their international investment banking activities; they needed some quick cost cuts to appease investors, so they sold their upstate New York branches. Myself, I would have cut the international investment banking department.

The upshot is that my local branch was among those sold. Along with that branch went my savings account, my checking account, and my credit card account. I ignored the announcement when it was first made – purely out of denial – but as the changeover drew near, it was clear that the relationship wasn’t going to work. The new bank’s customer service was terrible, and their interest rates were pathetic. I could still get free checking because of my balance, but they would no longer extend the same courtesy to my sons. So, it was time for a change.

You may be wondering why I’m not naming names – what bank had I been with, and which bank acquired them, etc. The reason is that the point of this post is not to pursue some personal vendetta against the banks that inconvenienced me. Given how common mergers and acquisitions are in banking, I want instead to offer some general advice about what to do if this kind of thing happens to your bank.

So, you receive a notice that your bank – let’s call it First Sellout Bank, or FSB for short – is being bought by Acquisitive National Bank (ANB). Don’t panic – there’s usually plenty of lead time between the announcement of a bank acquisition and its implementation. However, you should start gathering some information. This doesn’t mean you are necessarily going to leave ANB, but since you are being forced to change anyway, you might as well compare to make sure you are getting the best savings account rates, checking account fees, and credit card deals available.

Focus on the three Rs

If you decide to make a change, it’s best to do it before the merger becomes effective. That will save you having to go through two sets of changes, and possibly having some accounts temporarily unavailable.

Companies always send out a stream of happy talk to customers and the press when a merger or acquisition is going on. You’ll hear about how your service will be uninterrupted, and how you’ll ultimately benefit from synergies between the two institutions. The reality is that these deals are usually disruptive for both the acquired and the acquiring institution. The products and procedures you are used to working with will change, and you’ll be dealing with employees who are likely to be overwhelmed, confused, and often unhappy.

So, be ready to act, but don’t jump ship until you’ve made a careful comparison of whether a change would really benefit you. After all, there’s no telling which will be the next bank to get eaten.