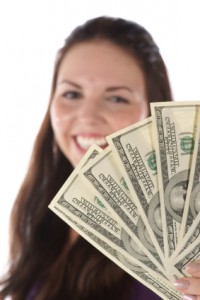 How much money does it take to be happy? That question was the focus of a recent survey by Princeton economist Angus Deaton and psychologist Daniel Kahneman. What they found flies in the face of the notion that money can’t buy happiness.

In their study, Deaton and Kahneman found that, as people earn more money, their happiness does increase, but only to a point. Once you hit the “magic number” of $75, 000/year, additional money has no detectable effect on their daily mood.

At the same, increases beyond the $75k threshold do have a positive impact on “overall satisfaction” – i.e., the general feeling that you have a better life.

Of course, $75k is a very specific number for a highly variable nation. I’d be interested in seeing a geographic breakdown of the numbers, as I suspect the answers vary by region, primarily due to differences in cost of living.

I would think that another important consideration would be your family status. As the dad of four boys, I can say with certainty that our basic lifestyle is significantly more expensive than for couples with no kids.

What do you think? What’s your price for happiness? $75k/year? More? Less?

6 Responses to “The Price of Happiness”