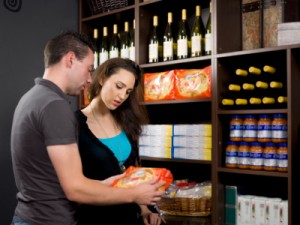 The other night while on my way home from work, I was reminded of the high cost of convenience. We were in the mood for margaritas, so I stopped by the liquor store to pick up some tequila and mix. As it turns out, they were out of the mix I was after, but I made a mental note of the price.

I then stopped off at the grocery store (a bit out of my way, but not too far) to grab the mix there. When I arrived in the right aisle, I was quite surprised at the price difference… What had been $7.99 at the liquor store was $4.09 at the grocery store. This was for identical items — same brand and same size.

I always assumed that you’d pay a premium to buy the “extras” at the liquor store, but I’d never paid attention to how big the difference was. That extra $3.90 for a bottle of margarita mix equates to a 95% markup at the liquor store vs. the grocery store. Sure, there are instances when it might be worth the added cost, but with a bit of planning you can avoid these extra expenditures most of the time.

Of course, the same can be said of a huge number of items. For example, a gallon of milk costs at least 30% more at our nearest convenience store/gas station as compared to the grocery store. In other words, it (literally) pays to be organized and informed, and to plan ahead.

10 Responses to “The High Cost of Convenience”