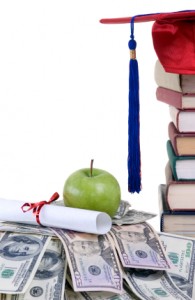 In case you missed it, prepaid tuition plans have been in the news recently as Alabama has been forced to re-consider whether or not they’ll be able to deliver on what their plan promised.

As you’re likely aware, 529 plans come in two main flavors: college savings plans and prepaid tuition plans. With the former, you contribute to the plan and make invest the money in hopes that it will grow. These plans are similar to Roth IRAs in that you don’t get a federal tax deduction (though, unlike a Roth IRA, you may get a state tax deduction) but qualified distributions on the back end are tax free.

With prepaid tuition plans, you prepay all or part of future college costs at today’s prices. Some allow you to buy “units” of tuition that correspond to a set number of credit hours or a percentage of the tuition bill while others allow you to purchase contracts covering yearly tuition bills for up to five years. Or at least that’s how they’re supposed to work…

Unfortunately, when you combine the market turmoil that we’ve witnessed in recent years with ever-declining state support of education, you have a recipe for trouble. In the case of Alabama, their prepaid tuition plan (the Prepaid Affordable College Tuition [PACT] Program) ran into trouble starting in 2008 and they won’t be able to pay full tuition for the remaining 37k plan participants.

While the state has agreed to supplement the plan to the tune of $548M in the coming years, that’s still not enough to cover their obligations if tuition keeps rising at the current rate. As a result, the program’s board reached a settlement to continue paying tuition at 2010 rates rather than ratcheting up their support as tuition increases.

Well, earlier this month the state Supreme Court agreed to reconsider its ruling and has they have since instructed a lower court to review whether or not state officials can retroactively apply the new law and reduce tuition payments. It remains to be seen how things will settle out.

The upshot is this: even guarantees aren’t guaranteed.

13 Responses to “The Danger of Prepaid Tuition Plans”