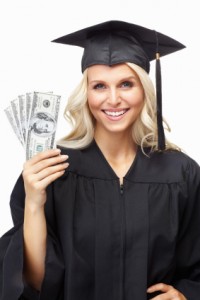 College is one of the best investments you can make – if it’s done right. If you or someone you support is getting ready to go to college, I have great news. You can go to college and graduate without being saddled with huge debts when it’s over.

The following advice is mainly going to help those with limited resources. If you’re in the fortunate situation of being wealthy and having unending financial support (even after you graduate), then the following post may not be very helpful to you. With that said, let’s dig in.

College isn’t an extension of high school. If it were, they’d call it grades 13 through 16. But they don’t. They call it college. It’s very different than high school and you should approach it as such. The purpose of college is to learn something to help you make a living after you graduate and have a full life. It’s not play time.

So the first tip is, if you don’t know what you want to do after you graduate college, don’t spend a lot of money at college trying to find out. The last thing you want is to graduate and then have to deal with getting out of debt if you don’t know why you’re doing it. You can be just as confused at community college, and it’s a lot cheaper.

And you should also think seriously about picking a high-paying major. I know that it’s not very “PC” to say this, but it’s the truth. This doesn’t mean you shouldn’t study English, if that’s your choice. But if you decide to study in the Liberal Arts department, do it for a reason.

Do you want to be a writer or a lawyer? Great. Studying English might make sense. But I reiterate, if you don’t know what you want to do, don’t waste money on an expensive school. In fact, sometimes it pays to go to private career colleges rather than a 4 year school. This way you learn a trade and start making a living fast.

If you don’t have the resources to go away to college, then don’t get into debt in order to buy that “college experience.” It’s not worth it. True, you won’t have the full on “living on your own” experience, but you will have the “living like an adult who doesn’t spend money he/she doesn’t have” experience. I think the latter will pay dividends far beyond the former.

You may be able to arrange your classes so that you can have a number of free days and you can earn some extra money during that time. This isn’t a bad idea, but you should really scrutinize this decision. If you work 20 hours per week and earn $10 per hour, that’s and extra $200 per week or $800 per month.

Depending on where you go to college, that could really go along way. But remember… There is a cost to working – and that’s time. Consider not working and taking extra units. If you could do that – and really dive into your studies – maybe you’d be able to graduate a semester or two early. And that means you’ll start earning more money sooner. That might be a better decision and if that’s the way you go, take courses during the summer too.

Some employers will pay all or part of your college costs. Before shouldering the entire burden yourself, look into internship programs that offer these benefits.

5. Discover the benefits of community college

Even if your goal is to get a four year degree, you can and should take advantage of the community college system. General education classes will be cheaper, easier to get, and count for as much credit as they do at your four year school. If you really want to save, go to community college for all your general education courses for the first two years, and then transfer.

Make sure to fill out the Free Application for Federal Student Aid (FAFSA). Depending on your situation, you may be qualify for some grants – or at least low interest loans. This system is based purely on financial need. This is my least favorite option, so please don’t get into debt if there is any way around it.

If you have your heart set on going to an out-of-state school, move there and work for a year to establish residency. A client of mine sent his daughter to a school that charges $18, 000 a year for in-state tuition, and double that for out-of-state tuition.

By having his daughter work for a year, she’ll be saving up money for college and she’ll be able to qualify for in state tuition too. That will save the family a total of $64, 000 – not too shabby.

There are a number of ways to slash housing costs. The best thing to do is stay out of the dorms because they are the most expensive alternative there is. The food plans are expensive, too.

Live a mile or two off campus, buy a cookbook, and get a bike. You’ll save a tremendous amount of money on housing and food, and you’ll also forgo the need to join a gym. You’ll get all the exercise you need peddling back and forth to school.

Other than in very unique circumstances, it doesn’t matter where you get your undergraduate degree. What you get out of college will be in direct proportion to what you put into it. And keep in mind that very few people work in the same field that they studied in undergraduate school. So don’t don’t get all excited about it and think the school you go to is the most important decision you’ll ever make – it isn’t.

My neighbor’s boys went to a very prestigious school in Boston and each graduated with $150k in debt. Of course, that was after they cleaned out their parent’s home equity and retirement accounts. They’re now working at nice jobs in the music business, which is what they studied. But they are working along side graduates from local four year schools. In their case, the fancy price tab only set them back, it didn’t help them in any way.

I hear story after story like this and I’m sure you do too. Don’t fall for the fancy snob stories about all the benefits of going to an expensive college for undergraduate work. It just isn’t worth it. I’ll even go one step further. My child got accepted to that same fancy school in Boston, but we talked it through and we decided as a family that the price wasn’t worth it.

Instead, she’s going to a four year state college and getting a much better education. How? She’s gotten super involved with the honors programs on campus and she’s rubbing elbows with the best and the brightest the campus has to offer.

Bonus Tip #11 – Remember who the boss is

If you’re paying for your daughter or son’s education, you get to decide how much to spend. I see far too many people who pay for the school their child gets accepted to as if it’s their responsibility to do so. Don’t fall for it. Since when did it become your reasonability to do that? Regardless of what you dreamed of (or what your child envisions for his or her college experience), there are economic realities and they must be considered.