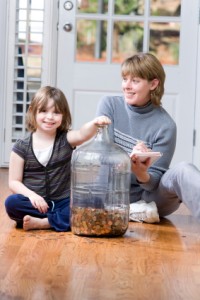 If you could teach your kids one thing about money, what would it be?

My almost 10-year-old and his youngest brother, almost five, have impulse control issues. Both have been diagnosed with separate but complementary behavioral disorders, which translate to: it’s hard for me to delay gratification.

Because I spend huge amounts of my time working on two things — (1) helping them figure out how to stop and think things through, and (2) writing about personal finance — I am uniquely suited (evidently) to teach my kids to be rich!

Because, if I’m to believe the news of the past several weeks, the combination of my two favorite pastimes is the best way to raise financially savvy (and maybe even rich) kids. The first thing you need, according to recent studies, is to teach kids to save money. But not just money.

Four decades ago, researchers at Stanford University gave four- and five-year-olds a room with a tray containing marshmallows, cookies and pretzels. An adult gave them a choice: eat one marshmallow (or cookie or pretzel) now, or wait until the adult returned and eat two.

At first the test was just mildly interesting. But in high school and again throughout adulthood, researchers followed all of the test subjects they could find and discovered that those who had waited for the second marshmallow were more successful in just about every way.

Researchers discovered that this had a lot to do with the way children “thought about thinking”; in other words, how they used tricks to keep their mind off the delicious item. Children could delay if they sang songs to themselves, or played under the table. The most interesting finding was that this ability to trick your mind could be taught.

Teach yourself to be marshmallow-rich

You can teach yourself to have willpower; more powerfully, you can teach your kids to have willpower simply by telling them the techniques. In some of the more recent experiements by Walter Mischel, the Stanford professor who devised the original marshmallow test, the researchers gave children some simple thought devices — for instance, imagining the marshmallow was just a picture — that dramatically improved self-control (and the marshmallow payoff).

In practice with 21st-century families, this could look like giving your kid a choice between buying an ice cream cone now, or getting a carton of ice cream to enjoy as a family later (and, if your kids have the sweet tooth mine have, give them more tomorrow). “If we focus on playing this game now, ” you could say, “you can take your mind off the ice cream.”

“And besides: the ice cream cone is $3 and the carton of ice cream is $6; but we can get two servings’ worth for the whole family!”

It’s not just about the mental tricks

Everyone agrees (well, everyone in this small survey of recent news) that it’s not just important to develop that ability to delay gratification and, presumably, save money instead of spend it. It’s also important to talk to your kids about the nitty-gritty of the finances behind that; the $3 vs. $6 example of the ice cream, and more.

I try to do this a lot with my kids, especially explaining big lifestyle decisions. We don’t have a car for many reasons that include environmental concerns, but the big one is money. We simply can’t afford a car without going into more debt. Instead, we have a stable of bikes. My now nine-year-old used to complain about not having a car.

Now he explains to his brothers, “if we had a car, we wouldn’t have money to go out to Little Big Burger.” I’ve detailed the whole kit and kaboodle to him; the car payment, the insurance, the gas, the repairs. Many thousands each year compared to $500 or $1000 in a licentious year of bike equipment purchases.

The budget details that dare speak their name

According to researchers at the University of Arizona, kids who talk to their parents about budgets, financial decisions, and investments save more and are more responsible about finances overall.

“Young people who reported their families had included them in conversations about money and budgets — who, for example, roped children into discussions about what kind of car the family could afford — were much more likely to make more responsible financial decisions as it came time for them to graduate from college, ” reported an NPR story on the topic. What’s more, these differences had nothing to do with the socio-economic background of the child.

This is the best part; you don’t have to be great at money yourself to raise financially responsible kids. You could be poor as dirt and simply do a great job of teaching your children frugality and the mental acrobatics necessary to delay gratification. As New York Times money columnist Ron Lieber has determined, teaching kids to be non-materialistic is the best way of raising a financial guru.

As usual with columns like this, the anecdotal evidence (the parents of three young financially-savvy authors report) is to be taken with a grain of salt. But Lieber is lucky to have actual scientific research backing him up. And one of the young gurus he features — Zac Bissonnette — is a friend of mine and I’ve certainly seen his mother’s inculcation in process.

“You’ve got to read my mom’s garage sale book!” he told me shortly after he met me (when he was still in his teens). “It’s out of print but it’s great.” A few weeks later, there it was in the mail. I recognize the lessons his mom taught him in his recent NYT bestseller, How to Be Richer, Smarter, and Better-Looking Than Your Parents.

Take your kids to yard sales with only five bucks

Perhaps the best way to prepare your children for a life of financial responsibility, then, is to tell them next time they see something they want, “Wait. Let’s try the garage sales instead.” Take them out the next sunny weekend with five dollar bills and teach them all your best garage sale tricks. (Take dollar bills because they’re easier to negotiate with. “But I only have two left!”) Take them out for ice cream on the way home. With marshmallows.

And let me know how it turns out.

4 Responses to “Teach Your Kids One Thing”