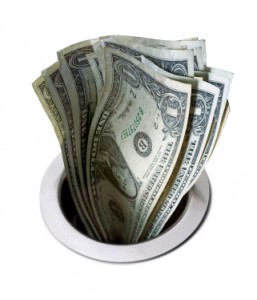 I’m currently engrossed in Peter Elkind’s entertaining 2010 book Rough Justice: The Rise and Fall of Eliot Spitzer. It’s a laugh-filled, fast-paced look at the life of the former New York attorney general and governor, whose swift rise to the top job in Albany was followed by an even swifter slalom out of elected office, after bombshell disclosures the “Luv Gov” had frolicked with ladies of the night.

Though the world of finance is laced through and through this story, one of the book’s particularly catchy references to cash snared my eye and led me to make a mental note — once I’d stopped chortling. The New York City business through which “Client No. 9” (Spitzer) procured his ladies, Emperors Club VIP, was run by folks who, shall we say, were not exactly Phi Beta Kappa material.

But the booking agent who took calls from johns and linked them with “girls” was astute enough to pinpoint an intriguing tendency among some of the Wall Streeters patronizing the Emperor’s Club. It’s such a universally human tendency there’s likely no one reading this who hasn’t made a similar blunder.

The insistence on paying more

Many clients, however, not being privy to this secret, looked down on the $1, 000-an-hour offers. Feeling they deserved better, they wanted to pay more. They insisted on paying more. And in fact, demanded to pay more, on what, unknown to them, they could have had for less than one fifth the price.

Now “stupid money” in this context likely has two components. One of them is that the money the johns earned was so extreme it was crazy (as in, “I really want to land a role on a prime time network sitcom, ” the actress said. “That’s where the crazy money is.”). The second is that they had so much money it really didn’t matter if they spent it stupidly, such as purchasing a call girl priced at 5.5 times as much as a differently-named call girl who was the same person!

Of course, stupid money exists everywhere. It’s not solely a New York phenomenon. And who among us hasn’t done something like this? Not with prostitutes of course, but with any consumer purchase we know little about.

It all reminds me of a time I had an assignment to write about a legendary Chicago auto dealer whose North Shore luxury car dealership had done a land office business for decades. This dealer was touring me around his opulent showplace when I happened to ask him how his certified pre-owned vehicle program, where pristine pre-owned vehicles were sold at prices between new and used, was faring.

He stopped dead in his tracks. Turning to me, he said in confidential tones, “Let me tell you something. I have coming in here regularly North Shore attorneys so incredibly wealthy they could buy this dealership right out from under me. Few of those guys would even dream of buying a new car. They’re only interested in purchasing certified pre-owned vehicles.”

These guys weren’t dolts, was the dealer’s message. They weren’t the kind to indulge in the spending of stupid money. They knew that on a luxury car, perhaps five figures of value disappeared from the car the instant it was driven off the lot. Being smart, the barristers wanted to avoid that fate by buying certified pre-owned cars on which that depreciation had already been registered.

But for every certified pre-owned car on that lot, there was a buyer who’d purchased the same car new, in the process immolating perhaps $8, 000 to $15, 000 of his own money. Only by paying the heavily inflated price for that vehicle could he achieve the satisfaction he sought. He’d acquired new one of the world’s most coveted automobiles, and by God had paid a huge price for it!

What can we learn? Two lessons, I suppose. First, we should research our options on major purchases, so that we don’t have to convince ourselves that only by paying the top price can we be satisfied with our purchase. It may be the case that the top-priced product is best, but it ain’t necessarily so. For example, when browsing for a new credit card, weigh the options against your spending needs. You might find that a 0% credit card meets your needs better than a more expensive rewards card.

The second lesson is for entrepreneurs, who should invariably include among their offerings one that’s stupendously high priced. Say they open a lemonade stand, offering a good, better, and best lemonade. Also offered should be a glass of uber-lemonade, touted as made from specially filtered waters, internationally-grown organic lemons and a few un-divulged secret ingredients.

There will surely be patrons willing to part with some stupid money to persuade themselves they’re among the few who can afford the very best.