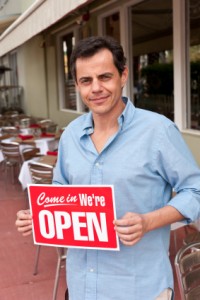 Years ago, a reporter with a Southern California-based publication spent a few hours striding up to perfect strangers on a busy Los Angeles street, and asking this question:

“So how’s your screenplay coming along?”

As the reporter suspected, many of the average Joes questioned were not at all surprised by the query. “I’m a third of the way through, ” or “I’ve finished and sent it to agents, ” or “I’m starting my 17th, ” were among common replies.

Just as penning an Oscar-winning screenplay seems a near universal dream for Angelenos, opening one’s own eatery appears a leading vocational fantasy of the broader American populace. Pooh-poohing sky-high failure rates among start-up dining spots, many entrepreneurially-minded folks feel they not only have the perfect idea for a restaurant, but could handily make it a success.

To determine whether it really is a cinch to launch a successful bistro, I sought out respected restaurant consultant Jody Birnbaum, president of Buffalo Grove, Ill.-based Cater Consult, Inc., for her thoughts on the notion. I was willing to bet I could accomplish two goals with such an inquiry. Not only could I save many would-be restaurateurs some serious grief and financial losses, but I could probably make some points about the broader task of financial planning as well.

An idea with sex appeal

“The idea of owning a restaurant is very sexy to a lot of people, ” says Birnbaum, who in her 30-plus years in the industry has handled tasks from washing dishes to managing her own event planning firm.

Thanks to The Food Network, the cult of celebrity chefdom has permeated the larger society, fueling fantasies of folks who believe they could be the next superstar restaurant owner, she says. While culinary innovation is at an all-time-high, Birnbaum cautions, “Don’t be seduced by the creative side. You’ve got to be able to dig in, know your numbers and the operational end.”

Succeeding in the restaurant game, she adds, is often a matter of “having the right concept, and having done your market research, which really allows you to validate your concept. You might think having a particular concept is a great idea. But you have to find out if there is demand for that concept. And you have to conduct a market research study, including some demographics, looking at the site selection, whether the site is right for that concept, if the space is the right size, and what area competitors are doing.”

Many people go wrong in the size of the restaurant they open. They don’t have the right size space for their concept, she adds. “You’re going to want to build as small and lean a kitchen as possible with as large a place for food and beverage as possible, to optimize your revenue potential, ” Birnbaum counsels.

Another potential problem is that many beginning restaurateurs don’t maintain an adequate pre-opening budget, she adds. They haven’t compiled a list of all the potential start-up expenses they may face.

“They need to make sure they’re fully capitalized, ” she adds. “With the start-up expenses in a restaurant, there are all kinds of construction overruns. They need to know build-out expenses, equipment expenses, labor expenses. They have to know the architectural fees, the kitchen design fees, the equipment fees, the TV expenses for a sports bar. Depending on what they’re doing, there are so many expenses that have to be accounted for. For instance, it’s best to negotiate a lease that doesn’t actually begin until your build-out is complete. Your construction can run over. You’re paying a lease, but making no income.”

Birnbaum counsels prospective restaurateurs to add a 20 to 30 percent contingency fund, over and above their pre-opening budgets. She also advises having working capital for at least three months before opening the doors.

In the end, she urges, consider starting your own eatery only if you have squeaky clean personal credit, can demonstrate good character, are investing yourself in the restaurant, and can convincingly show how you’ll make money.

If there’s a near universality to the idea it would somehow be fun to own a restaurant, there’s also universality to most monetary wisdom. Jody Birnbaum’s advice to would-be restaurateurs is applicable to us all, even if we don’t dream of unveiling our own chophouse, sushi bar, or grilled cheese emporium.

Do your homework. Remember Birnbaum’s guidance to do a lot of market research before investing in a restaurant. Researching an investment is solid advice for many other kinds of investors, including the retirement-minded. If you need to keep your savings safe, buying high-risk, high-return mutual funds makes as much sense as opening a steakhouse in a colony of vegetarians.

Sizing up an opportunity. Birnbaum noted many go wrong in the size of the dining operation established. By the same token, a lot of average folks don’t size their investments properly. How many people got burned in the tech wreck of the early 2000s by buying too much speculative stock in start-ups. And how many who should have bought condos bought McMansions before the mortgage meltdown?

Quarter-year cushion. As you recall, Birnbaum advises prospective bistro owners to maintain a contingency fund and keep three months working capital on hand. Similarly, many personal finance fiascos, whether resulting from a surprise job loss, medical crisis or any other reason, could be avoided if people just kept three to six months living expenses on hand for emergencies.

Whether founding and operating your own five-star restaurant or simply managing your menu of everyday consumer expenditures, it’s important to keep one thing in mind. An ingredient crucial to success is simple common sense.

One Response to “Starting a Restaurant: Ingredients for Success”