Earlier this year I had an opportunity to visit the World of Coca-Cola, which is essentially a shrine to all things Coke. Having been a child of the 1970s and 1980s, it was pretty interesting to walk back in time through the commercials of my childhood. Of course, the memorabilia housed there reached back far earlier than my childhood, to the very beginning of the Coca-Cola empire.

While we were there, I ran across the following advertisement from the 1950s, and was so amused that I had to snap a picture and share it with you: 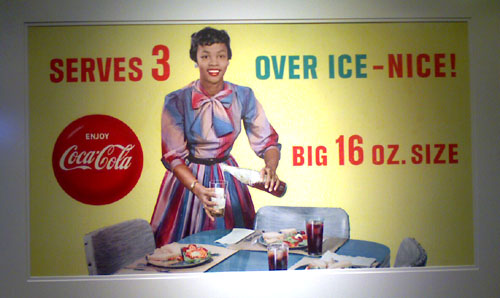 Hang on… The “BIG” sixteen ounce size serves… 3? Wow. Things sure have changed.

Nowadays, 16 oz. is on the small side for an individual drink. Instead, convenience stores are filled with 24 oz. behemoths selling for $1.49 apiece. According to the old math, that should be enough to serve five. But according to the new math, 24 oz. is just right for one Coke-slurping sucker.

Of course, at the other end of the spectrum we have the every-shrinking half gallon of ice cream. I’m not sure if you’ve noticed, but over the past couple of years, “half gallon” ice cream containers have dropped from 2 quarts (an actual half gallon) to 1.75 quarts to (most recently) 1.5 quarts. All without a price decrease.

Why the changes? Simple. Profit. If Coke can convince you to buy (and drink) an ever-increasing “single serving” (at an ever-increasing price point), they can push more product out the door while padding their bottom line. And if ice cream makers can convince you to buy an ever-decreasing amount of ice cream at the same price point, they can likewise pad their bottom lines.