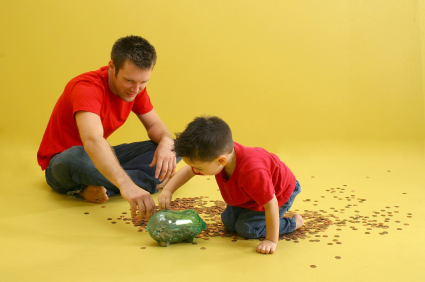 This is a guest post from WellHeeled of the Well Heeled Blog. If you like what you see here, please consider subscribing to her RSS feed or following her on Twitter.

My earliest memory of personal finance (though I didn’t know the term at the time) was when I was in middle school. My mother had always told me the importance of saving, but one afternoon, she pulled me aside and took out a few sheets of paper – the amortization schedule for the 30-year mortgage on our first home.

She then showed me how much interest we could save over the life of our loan if we accelerated payments on the principal during the early years of the loan. Although my mom first framed the session as an applied math lesson (percentages! subtraction!), that would be my most memorable lesson in financial decision-making.

Many experts say that leading by example is the way to show your kid show to be financially responsible adults. Show, don’t tell, they say. I agree that action is important, but my experience with my parents lets me know that parents should show AND tell. Kids learn from your actions, but they also benefit tremendously from words that explain the reason behind the actions.

Growing up, frugality was the normal state of things for me. My mother was aggressively paying off our mortgage. Every month whenever there was something extra, she put it into the house. As I grew up – and as I ventured into the homes of friends or classmates and become more exposed to malls and advertising – I come to realize that my parents led a very frugal lifestyle.

They bought reliable cars new, but then drove them for over a decade; they almost never went out to eat; and they refrained from buying a DVD player until a few years ago, when it was utterly clear that VCRs were truly machines of the past. Married for almost 30 years, my parents have rarely been on a vacation by themselves.

So I grew up in an environment where saving money is normal. Had my mother not told me later the reasons behind her aggressive payment of the mortgage (financial freedom, she would explain to me patiently), however, that lesson may not have stuck with me for all these years.

Even when I was a little kid, looking at the papers and the rows of figures under the Interest Saved, Years Remaining, Principal Paid columns, I knew I was looking at something powerful. Those numbers were the reason we sat in faded fabric couches when my parents might have upgraded to leather, and had the thermostat set 66 degrees instead of 72 in the winter.

Because of the choices my parents made, they were able to ultimately pay off their mortgage a decade early, invest in other real estate ventures, and pay for my college education. I didn’t quite realize it then, but I realize it now – that amortization schedule was much more than an applied math lesson.

It was a show and tell of a careful weighing and calibration of dreams – of choosing to forgo something (nicer cars, bigger TV, more stylish clothing) in exchange for gaining something else that my parents deemed more important – the ability to pay off our home years ahead of schedule, thus freeing up cash flow for other goals. To this day, I think that amortization schedule explained to me the essence of personal finance more than any expert every could.

Note: Also check out GetRichSlowly’s post on how to raise money-smart kids. JD Roth polled readers who provided tips on how their parents helped prepare them for financial independence.

12 Responses to “Show AND Tell: How to Raise Financially Responsible Kids”