In his post yesterday, Richard talked about the remarkable decline in savings rates over the years. Inspired by this, I visited the St. Louis Fed’s website where they have an excellent graphing tool that lets you visualize the savings rate over time.

Below you can see a graph of savings rates in the US from 1959 to present. That’s the widest interval for which data were available. 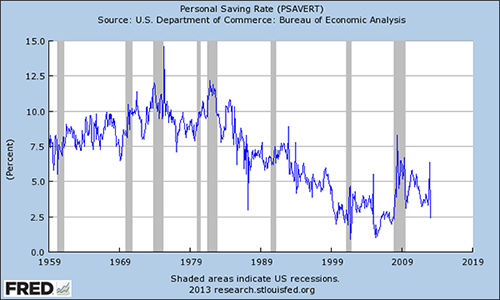 Yes, there have been some short-term reversals, primarily during recessions, but nothing sustained. And even when rates jumped back up during the Great Recession, they only made it back to mid-90s levels, around 5% (give or take).

But does that change look like it will last? Not to me. It looks like things are starting to trend downward once again.

Is this surprising? Not really. Given that the Federal Reserve has been working so hard to keep interest rates down, there’s not much incentive to save — at least not in a savings account. And borrowing is dirt cheap.

What do you think? Will savings rates rebound? If so, when? And what will drive the recovery? I’m curious to hear your thoughts.

13 Responses to “Savings Rates Over Time”