It’s no secret that I’m a huge fan of CFLs, so I think that this is a great question.

For starters, a 26 watt CFL is the approximate equivalent of a 100 watt lightbulb, so right there we can see that the CFL will consume 26% as much energy. If you’re curious about other wattage equivalents, check the chart below. 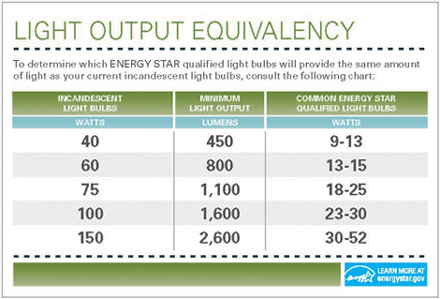 Now let’s work through the math so we can come up with some hard numbers.

I just checked our latest power bill, and we are currently paying $0.108/kWh for electricity, so that one incandescent bulb would consume $31.54 worth of electricity per year.

Doing the same math as above, we have:

At the rate for electricity, that works out to $8.20 per year — a savings of $23.34 per year just for switching out one light bulb. And that’s considering just the cost of electricity.

Given that most CFLs are rated to last an estimated 10x longer than incandescent lights, you’ll come out even further ahead if you can get them for less than 10x the price of an incandescent bulb. Since CFL pricing has come down dramatically in recent years, you’ll actually come out way ahead.

Another thing to consider is that CFLs run much cooler, so they don’t add as much to your A/C burden during the summer. It’s hard for me to put an exact number on this, so let’s just consider it to be icing on the cake.

The flipside, of course, is that heat produced by incandescent bulbs can (at least in theory) help when it comes to heating your home in the winter. But as far as I’m concerned, you should use your lights for light and your heating system for heat. In reality, an incandescent bulb has a somewhat negligible effect on overall comfort in a cold home as there is no way of effectively circulating that heat throughout the house.

Of course, the numbers above will vary based on the number and wattage of bulbs that you are replacing, how heavily they’re used, and how much you pay for electricity. But this should give you a good idea of to work things out for yourself.