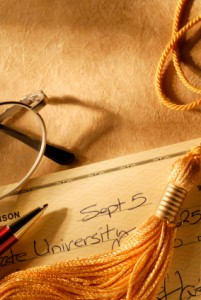 It was once considered gospel that, for most families, college educations were the second largest expenses they would ever assume, right after buying a home.

But the way college costs are rising (and home values are decreasing), I’m not sure college educations haven’t graduated into first place. Of course, a funny thing happened on the way to good ol’-fashioned college degrees growing ever more costly.

They appeared to lose a lot of their career-guaranteeing value, based on all the people with college degrees working at jobs that don’t require degrees. You’ve got sizable percentages of college grads, for instance, working as bellmen and porters, as well as limo and taxi drivers, writes Richard Vedder, author of Going Broke by Degree: Why College Costs Too Much. And those are the ones who have found employment. Worse yet, many are burdened with tens of thousands of dollars in college debts.

The problem, it would appear, is that parents are in love with the idea of a college degree, and will go to the poor house – or guarantee their kid winds up in one – to ensure that junior strides away from college with a sheepskin. Bearing that diploma from dear old State, he should be good to go, into a career filled with similarly-educated grads all whittling away at debts that could take them decades to pay off.

College is great for many folks, and I was surely one of them. I would not have bypassed the educations I received from numerous curvy coeds – of both the blonde and brunette persuasions – for anything. But if I was considering the idea of taking on $50, 000 in debt today in return for iffy job prospects, I might pursue a different route.

Time for a different route?

Happily, there is a different route, one that involves a lot less expense and may be more likely to yield a solid career. It’s called an associate’s degree from the U.S. community college system, one of the nation’s most underrated educational assets.

Community colleges play a different role than do four-year public and private colleges and universities. In their towns and cities, community college administrators typically work closely with area employers, the very people most likely to be able to identify the workplace skills needed now, and those that will be required in the future. Then the community colleges tailor degree programs to train folks for those fields. It’s a direct “needs equal jobs” equation that community colleges attempt to solve.

In many cases, the skills needed by employers and offered up by community colleges are those that prepare students for “mid-skill jobs, ” the kinds of jobs requiring more than a high school degree and less than a four-year college bachelor’s degree. In recent years, many mid-skill jobs have gone unfilled for lack of trained candidates, while jobs calling for four-year degrees or better have been overloaded with candidates.

So what might these mid-skill jobs be? I turned to Erin Brooks, spokeswoman for Harper College in Palatine, IL, one of the Chicago area’s leading community colleges, to name some of those jobs, and the yearly incomes they generate.

In many parts of the country, great mid-skill jobs like auto service technicians and HVAC technicians are going unfilled, Harper College president Ken Ender told me not long ago. These are not the old “grease monkey” jobs of yore, but sophisticated and technical jobs requiring utilization of head and hands. HVAC and auto service tech jobs once went to high school grads, but today demand associate’s degree-level skills.

Ender adds, “Most of the new jobs of mid-skills levels haven’t even been created yet.” Many will require knowledge of two or more of these disciplines: biotechnology, nanotechnology, information technology, and manufacturing technology.

When you consider that not everyone wants or needs to gain a four-year degree, community colleges loom as an even wiser educational solution.

Jeannine Kubalewski, for instance, is a graduate of Harper College’s Fire Science program, and now works for the Elk Grove Township Fire Department in northwest suburban Chicago as a firefigher/paramedic.

“I really wasn’t into the 9-to-5 office thing; it wasn’t something I wanted to do, ” Kubalewski said last year. “I always wanted to do something that most people don’t … I love my job, I love where I work … I wouldn’t change a thing about it.”

But let’s say the community college grad gets into the workforce and decides to take their education further. They’ll find this is a flexible route. So says Glenda Gallisath, associate vice-president for academic affairs at Glen Ellyn, IL-based College of DuPage, another premier Chicago-area community college. “What typically happens is they … Are successful in their fields, they’re valuable employees who know the technical side. But to move up into management, their employer encourages them to go back and get a bachelor’s degree … Many employers will support them financially, and the four-year institutions give them incentives to come, like flexible schedules.”

So if you’re seeking a way to slash tens of thousands of dollars in line item expenses from your household budget, while also helping to possibly better ensure your son, daughter, or perhaps even yourself gains skills in demand by area employers, you might want to trade a bachelor’s for an associate’s – at least at first.

See, the whole issue is really a question of degree.

12 Responses to “Robbery in the First Degree”