This is a guest post from Mike Piper, author of Investing Made Simple and proprietor of The Oblivious Investor. If you like what you see here, please consider subscribing to his RSS feed.

The Roth IRA vs. Traditional IRA question gets a lot of press, and that makes sense. By choosing correctly, you can significantly reduce the total taxes you’ll pay over your lifetime.

In a similar fashion, you can reduce your overall tax burden by planning your withdrawals strategically. That is, once you’re retired, how should you order your distributions? Should you take money out of your Roth first? Your 401(k)? Some combination of both?

The overall goal with planning your withdrawals is to take sufficient distributions from tax-deferred accounts to fill up the low tax brackets. The reasoning is that it’s better to pay 10% or 15% in taxes now rather than wait, take all the money out over the course of just a few years, and have the distributions bump you up into a higher tax bracket.

In fact, it can sometimes make sense to take distributions even if you don’t need the money to cover living expenses. (If that’s the case, it’s likely a good idea to use them for a Roth conversion, if you’re eligible.)

How about an example?

Martha and Mark are retired, and they’re both 60 years old (so they’re not yet receiving social security). Between interest income and Martha’s freelance writing work, they earn $13, 000 over the course of the year. They only need $30, 000 to cover their living expenses. They could take the extra $17, 000 out of a taxable account, Martha’s Roth IRA, or out of Mark’s traditional IRA.

What should they do?

Without knowing the rest of the details of their situation, it’s impossible to say with absolute certainty what they should do. But the following analysis should provide a decent starting point.

Due to the standard deduction and personal exemptions, a married couple’s first $17, 900 of income is free from income taxes. So it’s a no-brainer that they should take at least $4, 900 ($17, 900 minus their $13, 000 of other income) from their traditional IRA because it’ll be entirely tax free. 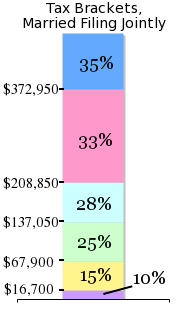 They still need to come up with another $12, 100 to pay their bills. If Mark and Martha expect their income tax bracket to be above 10% later in retirement (e.g., due to social security or required minimum distributions from their tax-deferred accounts), it makes sense to take that from the traditional IRA as well, thereby paying tax at 10% now rather than at a higher rate later.

And by the same reasoning, it’s likely a good idea to take an additional $3, 255 distribution from their traditional IRA in order to fill out the 10% tax bracket. They can then move that money into a Roth IRA, thereby paying tax at their 10% rate now and avoiding tax at a higher rate later.

In fact, if Mark and Martha expect to be in (or above) the 25% tax bracket later in retirement, it’s probably a good idea for them to take another $51, 200 out of their traditional IRA and move it into a Roth, thereby filling out their 15% tax bracket this year as well.

Once an investor begins receiving social security income, things become more complicated, and the benefits of tax planning increase even further. The reason for the additional complexity is that, as your income proceeds through the 15% bracket, the portion of your social security income that is subject to income tax increases as well.

By strategically planning which accounts you take money out of each year, you can reduce the tax on both your retirement account distributions and on your social security income.

Making small adjustments to your plans could potentially save you thousands of dollars in taxes each year. Unless you have a tax adviser who plays an active role in planning your finances (that is, he/she does more than just prepare your tax returns), it’s essential to have a solid understanding of taxation.