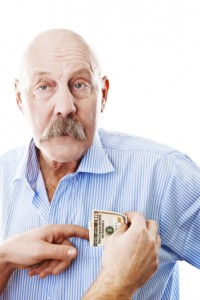 There’s a special and fiery place in hell for people who would try to rip off the life savings of retirees and senior citizens. And yet we know they exist, based on countless reports of frauds perpetrated against older Americans.

These snakes (and that’s unfair to the real reptiles) presumably wake up each morning, and rather than commuting to work, ask themselves this question.

“Let’s see. How can I steal from seniors the money they’ve accumulated over a lifetime? If I go about it the right way, I can take them for all they’re worth, leaving them with no savings, possibly no home and – because they’re beyond their earning years – no prospects of ever regaining their loss.” They then gaze into the mirror, give themselves a wink and proceed with their day’s “work.”

You may or may not be close to older family and acquaintances. But regardless of your relationship with them, wouldn’t you relish thwarting the insidious plans of the cold-blooded vermin who would steal from them? If you’ve got a heart, you would.

That begins by making sure the retirees in your life know the problem exists, how it can play out and what they can do to avoid ever being taken.

According to Sally Hurme, senior project manager at Washington, D.C.-based AARP, you merely need to follow the money to understand why seniors are targeted.

Many older folks have hefty nest eggs gathered across the decades to sustain them through the golden years. Unlike Americans of later generations, these people spent part or all of their formative years watching the Depression ravage their families and communities, and were careful about not spending every last dime. Their savings, in many cases enormously swelled through years of compounding, represent prime targets for fraudsters.

Those savings might not be so vulnerable if seniors were especially savvy about money. But they’re collectively hamstrung by the same lack of financial literacy that leaves every U.S. generation on the treadmill. Y’see, protecting and growing our finances has never been part of lesson plans at our schools. (It’s only been with the dawning of the Internet that Americans have been given ready access to information on such matters as best credit cards, best savings accounts, and how to save on life insurance.)

Even sophisticated, skeptical older adults can be fooled by scams, Hurme says, stressing “how good, how deceptive, how clever the fraudsters are. There are a lot of savvy oldsters who almost get taken in by an email from somewhere that looks like it could be credible. We want people to check it out, get a second opinion, and independently verify something’s credible.”

Hurme urges older folks be advised to avoid these schemes:

The phone call or email about a younger relative in trouble

In this setup, the nephew or granddaughter has lost a passport, or been a theft victim, and need money wired to them. In almost all cases, these are total fabrications. Scams have grown so insidious that fraudsters research their pitches on Facebook, searching for family info to make them look credible. Ensure older people know enough to check with stateside family members who can discredit the hoax.

The get rich quick scam

Anyone conversant with the name “Madoff” should be leery of this one. But if you’re on a fixed income, watching costs rise around you all the time, the temptation to score a grand windfall can be tempting. That’s why older adults are the targets of these ruses. These are usually nothing more than variations of the age-old Ponzi scheme, where money from new investors pays off earlier investors, with the perpetrator pocketing the profits until he or she can vanish and resettle somewhere in South America.

Because conservatism should be part of an older person’s money management strategy, that may mean parking some cash in a savings account. Fortunately, it’s easy nowadays to find out who’s paying the highest interest on online savings accounts or offering the best rates on CDs.

Thought you’d heard of all the swindles aimed at older folks? Be assured the fertile minds of the scam-meisters always are dreaming up new ones, some linked to health care reform. If older loved ones are hearing that they must furnish Social Security numbers to obtain a new Medicare card, Hurme assures us that these are simply crooked tricks aimed at medical identity theft, or plain old vanilla identity theft.

Check out the websites of AARP, state attorney general’s offices and fraud prevention organizations for more tips. Do your part to safeguard older folks’ life savings. Who knows? The money you save might be your own inheritance.

2 Responses to “Protecting the Older Generation Against Financial Fraud”