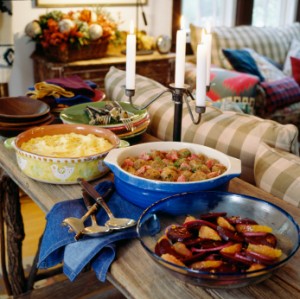 Though I live a fairly — ok, thoroughly — domestic life, I spend a lot of time as a guest or host. I have my weekly writer’s group; I have a monthly book group; I have a group of friends-with-kids who host raucous parties to which all of our children are invited; I have a diverse circle of circles (women on bikes, people who can food, urban chicken keepers, lit types) who are forever “networking” and “creating community.” I’d have to get another job if it weren’t for the potluck.

Potluck: the high life at a low cost

Like many people, I knew the potluck first as the province of church ladies and predictable Sunday lunches. As kids, we would always look for the plate of frosted brownies, the fruit salad with the marshmallows in it, the big spender who brought KFC. After college we wanted to be fancy and called it “Supper Club”; themed dinners with a rotating host, everyone brings a Spanish dish or a cocktail and an hors d’oeuvre.

But even we young bankers making young money could afford that a lot more easily than another night out at a restaurant, then afterward a bar, and we embraced it without acknowledging its frugality.

Now that I live in Portland, “potluck” is shorthand for, “we live in a creative class and not everyone is making money.” It’s a way to invite the friends who work for Intel and also the friends who are poets or bike mechanics and make sure everyone is comfortable. Some people bring the squash coconut curry; some people bring bacon apple pie; others bring expensive cava, or the $3.99 cabernet blend from Trader Joe’s.

What’s missing? The arguing over picking up tabs, the nervous calculations, the “oh can I borrow a few bucks, I’m short, ” the feeling bad because someone who likes wine and pork chops only orders a glass of water and a cup of soup. Every group dinner out, it seems, is wrapped up with angst over money (even — or especially — if it’s never said out loud). Every group potluck, it seems, is only fun. Those who don’t cook bring takeout from the grocery store deli or wine and no one minds.

I’ve also haggled for what seems like hours over a good destination for a group of people; these days, it’s allergies and sensitivies and vegans; back in my early 20s, it was people who didn’t like ethnic cuisines or had eaten there for lunch every day this week. Potluck, you bring what you want to eat, and if you find other goodies you can stomach: what luck!

It’s perfect for occasions like Super Bowl parties or tailgating, too; the focus can be on the game instead of whether you’ve cooked enough sausages.

Potluck means everyone (often) is invited

My next-youngest sister had a potluck wedding, and so everyone came; little children of every friend and relative, colleagues, fellow churchgoers. The only per-person cost was cake, and my youngest sister and I made that. No one worried about how many people showed up, except the one unfolding chairs for the dinner afterward.

Even for a less momentous occasion, a potluck means no hard feelings about, “oh, can I bring my friend who’s visiting? My three little boys?” — the expectation is, they’ll bring respectively larger quantities of food.

Some rules for a lucky potluck

Convinced? Well, make sure you do it right. Here are some basic guidelines to make sure your potluck is successful:

4 Responses to “Potluck: A Fiscal Attitude Worth Adopting”