Should you pay off your mortgage early? Or should you focus on investing with your spare cash? This is one of the most hotly debated topics in personal finance, with vocal proponents on both sides. Today, I thought I’d take a look at this issue from both angles and then share our approach with you. 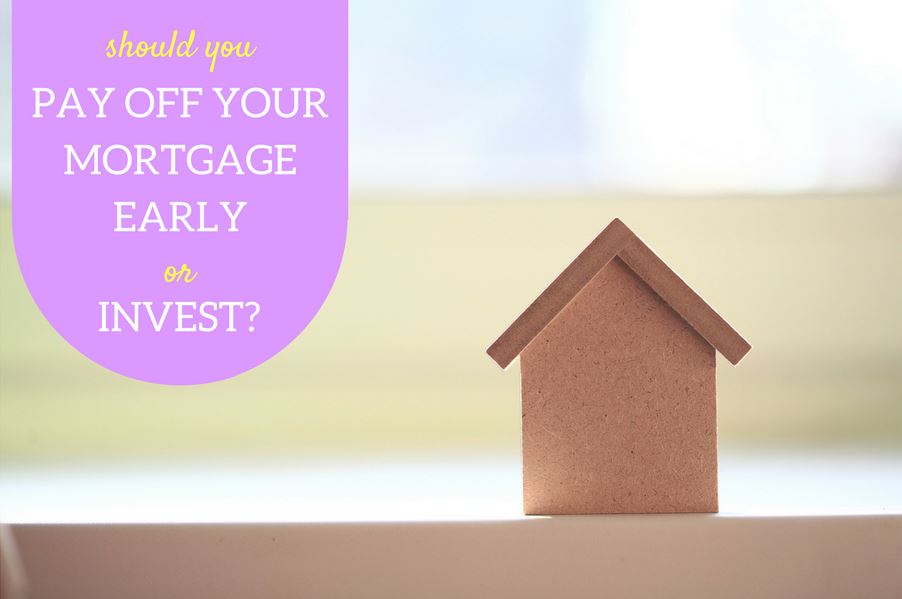 Why you should pay off your mortgage early

One of the biggest advantages of paying off your mortgage early is peace of mind. Once you’ve paid it off, you’ll wake up every morning and fall asleep every night knowing that the roof over your head is 100% yours. For many people, you can’t put a price on that sort of security.

Beyond the comfort/security aspect, paying off your mortgage early is a bit like locking in a guaranteed investment return. For every dollar that you pay early, you’re “earning” the interest that you would’ve otherwise paid on it over the balance of the loan period. This sounds great, right? Well…

The flip side of the “guaranteed investment return” argument is that mortgage interest rates are often quite low. On top of that, interest payments on a mortgage are also tax deductible (for those that itemize). These factors make early payments lose a bit of their luster.

Resource: Paying Off Your Mortgage Early: Some Things to Consider

Another advantage of paying off your mortgage early is that doing so protects you from yourself. While paying the minimum on your mortgage and investing the difference might sound like a great idea, there are no guarantees that you’ll actually follow through on the second part of the equation.

To see how long it might take you to payoff your mortgage, there’s a mortgage payoff calculator at this site for mortgage calculators

Why you shouldn’t pay off your mortgage early

The biggest downside to paying off your mortgage early is the (potentially large) opportunity cost that you’ll face. By this, I mean that you’ll be giving up investment returns that might significantly outpace your mortgage interest rate.

In other words, why pay off a 5% mortgage when you could be earning 8-10% on that money? Of course, one only has to look at the past year to know the answer… Those sort of returns aren’t guaranteed, whereas the mortgage savings are.

Another important point to consider is the effect of inflation. Over time, inflation erodes the value of the dollar. This means that your future mortgage payments will effectively cost less than they do now, as the money you’ll be sending in won’t be worth as much in terms of “real” buying power.

What are we doing?

Instead of pretending to know what’s best in your situation, I though I’d tell you what we’re doing. We’ve actually gone back and forth on this issue, but ultimately decided to do a bit of both. And yes, I know that answer is a total cop-out, but it is what it is.

We are currently in the fortunate position of being able to max out our retirement accounts while having enough left over to put some extra cash toward our mortgage and to work on building up a non-retirement portfolio. So, that’s exactly what we’re doing. I view it as “extra diversification.”

Related: 30 Years or 15 Years — Which Is a Better Mortgage Choice?

Admittedly, this hasn’t been an easy decision for us, and we’re still tempted to waver at times. After all, now is a great time to refinance, and I also suspect that there’s a good bit of inflation looming just around the corner.

Given the above, we’ve been tempted to refinance into a rock bottom 30 year fixed rate mortgage and pay it off as slowly as possible. At the same time, we would focus on building our investment portfolio. However, a wise man recently reminded me that “pigs get fat, but hogs get slaughtered.” In other words, it pays to be greedy, but not too greedy. In the end, we opted to stay the course.

Where do you stand on the mortgage pre-payment issue? Are you looking to get out of debt come hell or high water? Or are you paying off your mortgage on schedule while focusing on your investments?

424 Responses to “Should You Pay Off Your Mortgage Early or Invest?”