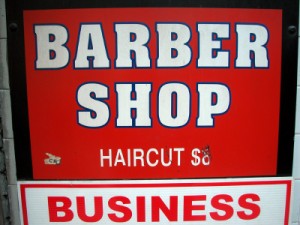 The other day at my son’s baseball game, I got to talking to another dad about where he gets his hair cut. Yes, this is definitely something that moms talk about more than dads, but I think the conversation started when I told my wife I was going to cut our kids’ hair myself to save time and money.

The look on my wife’s face when she heard this was priceless. Okay, so I’m not going to become the family barber, but the conversation prompted me to write this column about how to save a few bucks on male grooming necessities.

When I was in the service, my buddies and I would frequently save the $5 the base barber charged by cutting each other’s hair. Those haircuts were pretty elementary, and $5 went pretty far at the junior enlisted club back then.

Unless you favor the buzz cut that’s probably not an option for you, but if your wife is handy with the clippers you might still be able to pull this one off. Personally, I haven’t had a home-made haircutin decades. But that doesn’t mean I haven’t figured out how to save money on haircuts.

My first discovery was Great Clips and Bo-Rics, two chain barbershops that do the job for about $13. That’s half of what I paid at a regular barbershop in downtown Chicago. Of course the quality (or at least nature) of the magazines is different at those family-oriented places, but with the money I save by getting my hair cut there I could subscribe to any magazine I want.

Another cash-saving discovery: Many of those places routinely offer $5 coupons! How do they possibly make any money charging $8 for a haircut? I always tip the stylist well to make sure she’s not the one taking the hit from the coupon.

I gave up “real” shaving cream when I was in my 20s. The main reason I forgo the foam is that I hate having that sticky gunk on my hands. Instead I use a brush, and for the suds I put old soap chips into a broken coffee cup. If I’m on the road I take a squirt of the hand soap instead. Either way I get the pleasure of rubbing a comfy brush across my cheeks and get none of the soap on my hands. And the shave is exactly the same — I defy anyone to notice a difference.

As far as blades go, I love the quadruple-blade, supersmooth, highly advertised blades from Gillette and the like. But at more than $20 a pack, no way! So instead I stick to the knock-off double-blade cartridges that cost a third as much. The shave is not quite as much fun, but the job gets done.

No one likes to stink, and fortunes have been made making men smell good. The main impetus for smelling good, of course, is to attract a romantic partner — hence all those teen boys splashing on the Axe. But even after you’ve secured your life partner, you still want to smell nice (right?). The good news is that you no longer need to stock up on Polo and English Leather.

Here’s how to keep smelling OK in the post-cologne time of your life without spending much money: First, use cheap deodorant soap. A block of six bars of Irish Spring or Coast should cost less than $10, and it will last for months (obviously less if others in your family use it).

Next, use an antiperspirant, but not an expensive one. Unless you have sensitive skin, you’ll probably find the store brand works as well as any other. Finally, keep your breath fresh by brushing, flossing, and rinsing with a decent-quality mouthwash.

One more breath tip: Drink lots of water. It doesn’t cost you anything, but keeping yourself hydrated is essential to keeping your mouth moist, which minimizes bacteria growth.

Clip your nails frequently. It doesn’t cost anything, and few things are grosser than grungy nails. Use cheap shampoo — it probably has the same key ingredients as that $20 bottle your wife buys at the salon. Dress in clean, classic, simple clothes — it costs less to invest in two quality outfits for special occasions than a bunch of flashy junk, and it looks way better.

Mr. Cheap doesn’t spend a lot of time worrying about his grooming, but he covers the basics and knows when to step it up. Perhaps most important, he knows that spending big bucks will almost never lead to superior results!