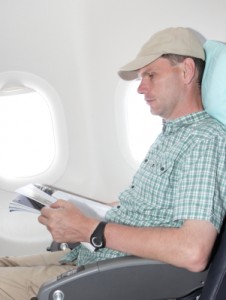 Remember the last time you were skimming across the clouds in a big commercial jetliner, looking to pass the time? You may have fished one of the glossy catalogs from the seat pocket in front of you, and flipped through the pages of amazingly ingenious and high-priced items.

If only you won the lottery, or came into a plum inheritance from the rich aunt you’d never met, you thought. Then you’d be able to make a few of those coveted items your own. But you knew the idea of ordering liberally from a catalog that included such items as hardwood Irish harps, portable spas, and authenticated seats from the original Yankee Stadium was sheer fantasy.

The publication was there in that seat pocket, you knew, for the sole purpose of siphoning cash from the wallets and purses of passengers with more moolah than they know what to do with. Not those, like most of the rest of us, who have less than we know what to do with.

But if you think those in-flight shopping catalogs are the only ones with terrifically innovative gift ideas to buy for yourself or for others, or if you think you have to pay a ton for such items, you haven’t met my pals Walter, Carol, Miles, and Harriett. These four stalwarts lend their names to mail order businesses of a wholly different breed. No, their catalogs aren’t in airline seat pockets. But the offerings within are at least as innovative.

And their prices? They’re amazingly low, not high.

Friends of the frugal

I’m speaking, of course, of the catalogs of Walter Drake, Carol Wright, Miles Kimball, and Harriett Carter. Each is a different mail order retail company, but at the same time so similar they might as well all be from the same corporate parent.

Let’s start with their names. Is there something about Anglo-Saxon monikers, the kind that would not look the least out of place on the manifest of the Mayflower, which inspires confidence and willingness to spend? It would appear so, based on the whitebread names of the people who founded or head these companies.

Just once, I’d like to see a good ethnic name gracing a mail order catalog. There may be a mail order firm somewhere in the nation called Jose Hernandez, but I haven’t found it yet.

Then there’s the look of the catalogs. All have colorful covers emblazoned with attention-getting words and numbers. For instance, I’m looking at the bright blue cover of the Miles Kimball Summer Sale 2012 catalog, which trumpets in brilliant yellow and red hues, “Biggest SALE of the Year! Savings up to 75 percent off.”

Meantime, on the page of the Walter Drake website, one finds the same colors playing out in the headline “SHOP THESE GREAT BARGAIN BIN VALUE$”

Yet another amazing similarity is that most of the companies want you to know just how long they’ve been around delighting customers with their economical, ingenious gift items.

Underneath the Miles Kimball logo is the line, “Since 1935.” The exact same spot under the Walter Drake logo displays the message, “Since 1947.” And Harriett Carter’s script style logo appears just above a smaller subhead reading, “Distinctive Gifts Since 1958.” Perhaps not surprisingly, you have to search a bit to learn Carol Wright has been a leading direct mail marketer since its founding in 1972.

The best thing Walter, Carol, Miles, and Harriett have in common is value. It’s the ingenuity and affordability of their products themselves that virtually ensures a place in your heart for the phenomenal foursome. Just page through their catalogs and see if you don’t find yourself convinced you could use at least two out of every three products advertised.

To provide an example, as a friend of mine turned 49 recently, I sent her from the Walter Drake catalog a doubly functional gift item. It’s a five-inch “Personal Megaphone” powered by three AAA batteries. As I noted in my birthday card to her, it will allow her to be heard above the crowd as she roots on her daughter in college basketball games. And now that she is in her 50th year, the megaphone, if kept at bedside, will enable her to summon help if she finds she has fallen and can’t get up.

And here’s a big benefit. By purchasing low-priced items from Walter, Carol, Miles, and Harriett, you can likely avoid paying hundreds or thousands of dollars for something else.

At Carol Wright, for instance, slip covers for your furniture start at just $29, letting you sidestep a costly living room makeover. Purchase a very authentic-looking “imitation security camera” from Carol for just $9, and you’ve gotten around the need for a hugely expensive home monitoring system.

Let’s say you have some shoes that are just a bit too tight for comfort. Just pick up the Two-Way Shoe Stretcher from Miles Kimball for $17.99, and “this professional-style device” will stretch the length and width of your shoes, saving you the pain of blisters, corns, bunions and high-priced replacement shoes.

You can also avoid the expense of hiring a costly lawn maintenance service by selecting the Grass Repair Roll from Harriett Carter. You just cut patches from this pre-seeded 10-foot-long grass roll, and use them to fill in the bare spots in your lawn. Voila! An emerald expanse your neighbors will envy for just $7.98!

My advice? Leave those in-flight catalogs to the millionaires. Once you feast your eyes on the irresistible and affordable mail-order assortments offered by Walter, Carol, Miles, and Harriett, you won’t need a jet aircraft to feel you’re flying high.

8 Responses to “Mail Order Friends of the Frugal”