“Burger King abdicates US citizenship, ” shouted the normally staid BBC. Burger King seems to be vilified everywhere for its plan to merge with Tim Hortons, the Canadian breakfast giant. Why? This thing called tax inversion.

The goal of this post is simply to break through the rhetoric and lay out the basic issues of the deal.

Tax inversion: what they say

The way critics present it, it’s nothing less than outright treason. Pres. Obama, speaking at a college in Los Angeles,  called them “corporate deserters … technically renouncing their U.S. citizenship … fleeing the country to get out of paying their fair share of taxes.” Ouch. Sen. Sherrod Brown of Ohio went further, urging a boycott of Burger King in favor of competitors like Wendy’s and White Castle, because they “… haven’t abandoned their country or customers.”

In other words, corporations guilty of this thing called tax inversion are not going to get ticker tape parades in their honor anytime soon. Congress has responded to the practice with legislation likened to an “iron curtain, ” keeping those corporations in the USA by legislative force. In 2004, they passed a law which stopped the growing trend of tax inversions in its tracks, as this chart from Bloomberg clearly shows. However, the law had to leave an opening for genuine mergers, and this is the opening an increasing number of companies have jumped through in the past two or three years. So, they tightened up those iron curtain laws again in 2012.

And now this. First it was the highly publicized Pfizer/AstraZeneca merger. Congress, frustrated at the impertinence of these corporate traitors, is throwing up yet another iron curtain: laws with inflammatory titles like the Stop Corporate Inversions Act and the No Federal Contracts for Corporate Deserters Act.

On the other side of the debate, you have capitalist apologists who think it’s the divine right of every corporation to pursue the almighty dollar, the heck with money-grubbing politicos and bureaucrats.

What exactly is tax inversion?

Is tax inversion really an American corporation fleeing its country like the draft dodgers of a few decades ago, and abandoning its employees and customers as the good senator from Ohio called it? Is a company firing all its U.S. staff, packing everything in a U-Haul convoy, and hightailing it across the border to set up shop all afresh, all so they don’t have to pay a nickel of taxes while they reap the benefits of doing business in America?

The truth is far more mundane. Tax inverting corporations don’t leave, they don’t lay people off, they don’t move offices, and they can’t renounce any citizenship because they don’t have such a thing as a citizenship. So, in reality, nothing happens, nobody abandons anybody.

Really? Yes. The central issue surrounding tax inversion is America’s quirky requirement that corporations headquartered in America pay tax on money they earn in other countries.

Why is that quirky? Recognizing that we all live in a global village, most countries have tax codes which tax corporations only for income earned in that country. In other words, they don’t tax income earned in other countries. America is different. We tax corporations on all income they make everywhere. We give them a credit for the income taxes they pay in Canada, Ireland, or wherever — but, in total, they still have to pay the American corporate income tax rate on all worldwide income, no matter where they earned the income.

In total, both companies pay $600, 000 in taxes to their respective governments. Now let’s say the two want to merge. There are two ways they can do it:

The total comes to $600, 000 — no different than it was before, when the two companies were separate.

That last $100, 000 in Option 2 above, then, amounts to a “super tax” on non-American earnings for corporations headquartered in America.

In the example, the new merged entity’s tax bills stay the same as before the merger. There are no savings, reductions, escapes or dodges. All there is, is no increase.

And that, as you probably guessed from the example, is what’s about to happen with the Tim Hortons / Burger King merger: Burger King’s 70 percent owner is going to create an entirely new corporation in Canada. That corporation (as yet unnamed) will purchase both Burger King and Tim Hortons.

Its only crime is that the new entity will avoid paying the American “super tax” on its Tim Hortons earnings. Lost in the rhetoric is the fact that Tim Hortons has twice the revenues and earnings of Burger King. They’re a dominant Canadian institution, like Starbucks and McDonald’s are here in America. Why would America feel cheated that those earnings are not going to be “super taxed” in America? Does it make sense to you now that they’re structuring the merger to have the new HQ in Canada?

Unfortunately, because the super tax compelled them to base the company in Canada (all the major players are American), it doesn’t take a rocket scientist to guess that all Burger King’s existing foreign operations will be moved to Canada as well. Because of that, the USA will lose the super tax it received on BK’s existing foreign operations in the past.

Last point on the merger: Remember those new laws Congress is furiously working on now? The Burger King / Tim Hortons merger would still be legal, because of how big Tim Hortons is. The fact remains: Any legislation has to allow for legitimate business combinations across borders.

Is there a solution?

That losing of the super tax on foreign operations,  that is the main conflict between corporations and government. Pfizer’s proposed purchase of British drugmaker AstraZeneca could have led to a significant reduction in the $4 billion of income taxes Pfizer currently pays (25 percent of their pretax income). When compared, the less than $90 million Burger King pays is a pittance.

In theory, all Congress has to do is lower the corporate tax rate to something in line with most other countries, which would seem to be in the 20 to 25 percent neighborhood. Corporate income tax at present makes up only about 11 percent of U.S. income taxes: 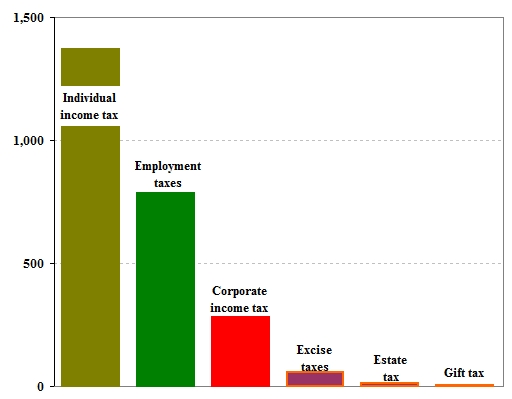 Of the corporate tax revenues, the super tax probably doesn’t add up to more than around 1 to 2 percent. (It’s only on foreign earnings, after all.) However, it is well known that both parties in Congress have hardened their ideological battle lines, so the odds of a sensible tax code change are slim.

The goal of this post was to lay out the issues behind the proposed Burger King/Tim Hortons merger in order that you can judge for yourself how much is rhetoric. Then, when the next tax inversion deal is announced or rumored, you’ll be able to figure out what’s really happening.

Moral of the story?

When you look for companies to invest in, look for those which derive a growing portion of their income from overseas. It’s only a matter of time before they escape the “super tax, ” either through tax reform or finding a way to restructure the business in a way that removes the “super tax” burden.

What do you think of the “super tax”?

8 Responses to “Is Burger King Guilty of Tax Inversion?”