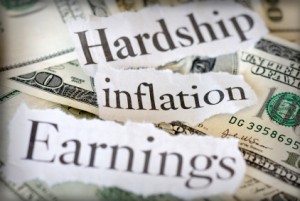 Are you tired of uber-low interest rates on your savings account? Well, you can thank Federal Reserve policy for that. And it’s not likely to change anytime soon.

About a month ago, the Fed gave a clear indication of what it will take before they’ll start letting interest rates rise. They saying that, as long as inflation remains below 2.5%, they’ll keep interest rates near zero at least until unemployment drops below 6.5% — which could take a couple more years.

As for inflation, the consumer price index was up 1.7% during 2012, with the core CPI (ignoring food and fuel) increasing 1.9% — still well below their trigger point for letting rates rise.

Thanks to all of this, real (i.e., inflation adjusted) wages apparently increased 0.3% in December. Not only that, but average weekly earnings were up 0.6% thanks to workers being able to put in more hours on the job last month.

Now, before you get too excited, keep in mind that we’re talking about a one month change here. And while this is actually the second straight month of gains in real wages, two months is hardly a trend.

It’s also worth noting that most people are still losing ground, as a fractional gain isn’t enough to offset the expiration of the payroll tax cut. That being said, gains are always better than losses…

What do you think? Are wages gains more than keeping pace with cost increases?

My experience has been that wage gains (real or otherwise) are still tough to come by, and that it will likely be awhile before the situation changes.