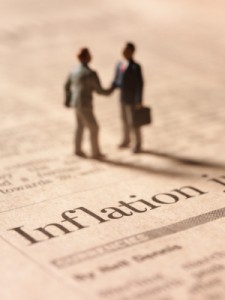 When it comes to planning for your financial future, inflation is a huge issue. In fact, given the historic annual inflation rate of 3.75% a million dollars today will be worth just over $190k in 50 years. Moreover, using that historic rate along with the rule of 72, we can further conclude that prices will double every 19.2 years.

CPI vs. the true cost of living

The motivations for underestimating inflation are obvious. Because numerous governmental programs, as well as estimates of “real” economic growth are indexed to inflation, the federal government can (at least in theory) save money and paint a rosier economic picture by understating inflation. I’m not going to wander of into the weeds and debate whether or not this is happening. Rather, I’m just pointing out the potential benefits of inflation manipulation.

Note: Just to clear up any confusion, inflation-indexed government programs typically use the CPI-U, which does include food and fuel prices. The point here was just that, for a variety of reasons, the various inflation estimated have been criticized as inaccurate, with a tendency to understate the real situation.

If inflation were to be understated, however, this would be a huge deal from an investor’s perspective. After all, if you think that inflation is running at X% and it’s really running at Y% (where Y > X), then you’re likely to fall well short of your goals – at least in real terms. The reason for this is that, even though your portfolio may be growing, the value of each dollar is shrinking faster than you expected.

Estimating inflation in the real world

With that as a backdrop, I wanted to point out an interesting website that I ran across this past weekend. It’s called The Billion Prices Project (BPP). The BPP is an academic project based at MIT which seeks to use prices collected at hundreds of online retailers to estimate a daily price index.

As of now, they are still well short of covering all of the goods and services that go into the CPI. If you click through and look at the graph, you’ll see that there is a rough correlation between the BPP index and the CPI. Since late 2009, however, it appears that the BPP index has been running ahead of the CPI.

Given the differences in what the two indices cover, it’s difficult to say if this difference is real, but this is (to me at least) a fascinating project with a lot of potential. It would be great if they can tweak the BPP to the point that it converges on the CPI. It would be especially nice to see a real-world calculation that includes the cost of fuel.

While fuel prices aren’t easy to come by online, and thus aren’t part of the BPP index, it seems like they could partner with a crowd-sourced database such as Fuelly (which I’ve written about before) to get real-time estimates of fuel prices from throughout the country.

4 Responses to “Inflation and the Billion Prices Project”