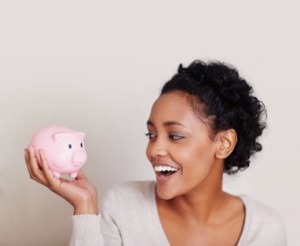 Andy and his wife Rachael are both 46 years old. They have two children, ages 7 and 4. They don’t have to worry about getting out of debt. They don’t believe in credit card balances. They own 2 rental homes overseas, and the condo in which they live. They actually use the cash flow from their rentals to help out relatives who still live overseas. They are givers!Other than that, they have some money in a money market account, a long-term CD worth about $20, 000 and an IRA with $27, 000. He contributes to his IRA each month.

Rachael is a stay at home mom, and Andy brings home about $3700 a month. They have absolutely no debt other than the mortgage on their the condo and, like I said above, they pay off their credit cards every month.

If Andy asked you how much he should be saving every month for retirement, what would you say?

I told him I was amazed that he was able to save anything on the salary he brings in. (Of course I put it more gently than that.) Remember, LA is a very expensive place to live. I gave him the Gold Star Award for frugality, but wasn’t about to let him out of my office so easily. He wanted to know how much money he should be saving, and I wanted to help him find the answer.

I suggested that he forget about rules of thumb. Those general concepts are useless, and you’ll see why in a moment. Instead, I asked Andy about his ultimate financial goals. He told me that he wanted to save $1, 000, 000 in financial assets and then retire to his native country where he could make that money really last. He told me that he wanted to achieve that goal in 20 years – when he will be 66 years old. Now I had something to work with.

I did a little math using my fancy calculator and determined that Andy needed to save $20, 000 a year over the next 20 years and invest it at 7% in order to achieve his goal. If you are interested, you can easily do these projections yourself with an online calculator. As soon as I told Andy this, his eyes lit up. Now he had something concrete to work towards rather than an abstract “rule of thumb.”

He told me that his wife Rachael would start working in September, and that he was in the middle of starting a side business. He committed to saving every incremental dollar that he and his wife earned until he reached that $20, 000 annual goal, which he thought was very doable.

I told Andy that the real power of knowing his “magic number” was that he can now treat that savings goal as an obligation – like a bill that he has to pay (to himself!) every month. I know that I wasn’t able to really save until I started looking at it this same way.

I’ll admit that for many years, as my income increased, so did my standard of living. I was frustrated to see that even though I was earning, I wasn’t saving. The only way I found to solve that problem was to treat my savings goal as a debt that I owed myself – which it is really is. I pay myself first so I don’t spend it. That’s the only way I found to consistently achieve my financial savings goals, and that’s what I recommended to Andy, too.

We both realized that it would be difficult to hit those savings goals immediately. He needs to ramp up his small business ideas. And his wife won’t start working until after their youngest starts school in September. I told him not to worry. While it’s unlikely that he’ll reach his savings goals this year, he can build up to it. I’m convinced that he will grow that annual savings far beyond the $20, 000 target as soon as his business starts humming and his wife starts bringing home those sweet pay checks.

Have you asked yourself how much you should be saving?

In my opinion, the bottom line is that you need to focus on your own goals rather than saving an arbitrary percentage to save every month. By doing so, I’ve found it much easier to achieve my financial objectives.

What about you? Are you saving a fixed percentage of your income? Shooting for a certain dollar amount? Or doing something else entirely?

7 Responses to “How Much Money Should I Save?”