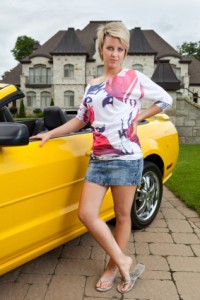 I spend too much time thinking about how other people spend money. (But! I’m a personal finance writer!) When someone mentions how hard it is to be a working mother in a two-income family, I think, but that’s a path you chose, working out in my head how possible it might be for that family to live just on one income. I’ll try to figure out what the mother’s partner does, and throw out a salary; two people can live on $80, 000 alone! I’ll tell myself.

Or I’ll see a neighbor’s beautiful cars, their nice furniture and several game consoles in their small apartment, and wonder if they’re stuck renting because they spend so much money on cars and furniture and electronics and stuff. I’ll add up their phantom debt and feel better about my low-cost but high-intensity home, with its big yard and old furniture and family fleet of bikes.

Why I should stop obsessing about other people

I’d probably be better off focusing on my own finances. The advice that’s often used in spiritual circles applies in personal finances too. I think the 12-step people say something like, “Stop comparing your insides to other people’s outsides.” You could think of this, in financial terms, as comparing your savings-to-debt ratio to other people’s shiny new stuff. When you spend time obsessing about how other people are screwing up, or rationalizing your money decisions with others’ presumed habits, you forget to work on your own issues.

My friend Rebecca got me thinking about this back in December, when we were talking about grocery budgets. I estimated how much I spend each month at People’s Co-op, the grocery cooperative I belong to. The co-op pays out a share of the profits based on each member-owner’s spending for the year, so I mused about ways to allocate more of my grocery budget there. My spending at the co-op accounts for just a quarter of my monthly grocery bill. “Wow, that’s how much we spend on groceries for a whole month, ” her husband said. I thought they were kidding. They weren’t.

The talk got Rebecca interested in tracking her grocery budget more closely. How low was it, exactly? How low could it be? She pitched an idea to xojane, the women’s online magazine, and when her piece on feeding her family on $129.99 for a month was published, there was an immediate flurry of responses.

Frugality and the $50 corkscrew

One of the photos accompanying Rebecca’s post showed a fancy wine opener. Someone asked how Rebecca could be so stingy about food when she owned a $50 corkscrew.

Rebecca was taken aback. The wine opener had been a gift: She had no idea how much it cost. Who knows, maybe it was purchased at a closeout store for $8.97! But the comment spoke to a larger question, which was, “Can you be considered ‘frugal’ if you save in one area of your life but spend a lot in another area?” (Sure you can. To speak in accounting terms, one is variable cost and the other is a capital expenditure. It might even be smart to spend extra on “capital costs” like wine openers, cookware and the like if it means they will last a long time. But I digress.)

There was an even bigger question, though, one that the commenting reader had ignored: “Isn’t there something I can take from this and learn?” There was plenty. Rebecca had made some insights about preventing wasted food, only buying pantry supplies you’ll actually use, and taking advantage of the abundance in her friends’ gardens. But some readers were spending so much time wondering how Rebecca could afford that pricey wine opener, how much her husband made and what sort of neighborhood they lived in that they were largely missing the takeaways.

Not keeping up with the Joneses

What’s driving our need to be so nosy about other people’s spending? Maybe it’s what or who we surround ourselves with.

I’ve read about studies that suggest people who don’t watch TV spend less. This is because the lifestyles depicted in many TV shows are upper-middle-class, while most of us don’t make upper-middle-class money. Studies show that people who watch more TV are more materialistic and are more likely to think that affluence — ownership of pools, tennis courts and luxury cars — is prevalent among Americans.

This “keeping up with the Joneses” effect was huge for me when I went to business school and worked in investment banking — I mean to say, hugely bad. While I gained valuable skills and met wonderful people whose friendships I’ll treasure always, I also felt that I needed to spend money to dress, drive, travel, and eat like my friends and colleagues. If I’d stayed in investment banking, I know my life would be like the fictional (but very reality-based) protagonist of this short story, a banker whose lifestyle — kids’ private schools, vacation house, fancy cars, remodelings — moves in such close step with his salary that, when he doesn’t get the bonus he expected, he’s destitute.

When I left that life, I wasn’t so much destitute as just in a bad financial place. I was trying to keep up with people who not only made a lot of money but whose parents made a lot of money, too — so instead of going into debt for business school, they were using savings or getting help from their families. Despite this difference, I might have succeeded in maintaining my spendy lifestyle, but it would have meant sticking with the high-pressure, around-the-clock, slavishly corporate career path, which wouldn’t ever fulfill me (I wonder if it could “fulfill” anyone, truly).

Striving for my ideal self

Since then, I’ve tried to ask myself: If I lived in a world of my own making, how would I spend and save money? I’ve largely succeeded in being true to this. I’ve decided that art is more important to me than the appearance of having money, so I have chosen a career path that gives me lots of time to write literary things that are worth almost nothing. I’d rather have a beautiful vegetable garden than a nice car. I’d rather spend lots of time with my kids than send them to fancy private schools. I’d rather eat good food than keep up with the latest couture. I’d rather never have a reason to use a car service.

The spending comparisons creep in every once in a while. I have a couple of friends who have, despite the odds, earned huge advances and have sold oodles of books doing what I love — writing. And every once in a while, a wave of jealousy will pass over me and I’ll want to have what they have.

But then I’ll open a book like my friend Zac Bissonnette’s (he’s one of the New York Times-bestselling authors I grimly call “friend”). He says having $2, 000 in a savings account can change your life. I can grumble, “Sure, Zac, easy for you to say… you’re working on your fourth book!” Or I can take a good look at his advice and say, “You’re so right, ” then just say no to grabbing breakfast at Starbucks ($14) for my kids instead of making pancakes ($2 with lots of maple syrup).

Comparing myself not to the “outsides” of my friends but to the picture of my ideal-self-in-a-perfect-world keeps me focused on the financial decisions that will get me closer to that ideal self, not closer to the TV depiction of awesome. Ideal me has a lot more than $2, 000 saved; she has a pantry full of home-grown canned goods, she’s taking her kids with her on a low-frills book tour and she’s found time to make her own couture-style clothes (I can dream). None of that is accomplished by worrying about how other people spend their money.

And doesn’t worry give you wrinkles?

9 Responses to “How Much Does She Spend? Why Comparing Yourself to Others Is a Mistake”