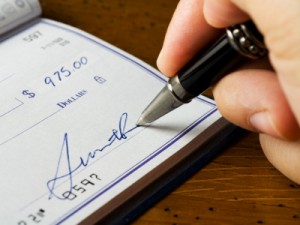 Just over a year ago, my wife wrote a small check for an end-of-the-year school function of some sort. The check was made out to the school, but it was collected by another mom. A month or so later, I noticed that it still had not cleared the bank.

At the time, I assumed that it had just gotten lost in the shuffle and that it would eventually re-surface, perhaps when school started again in August. Well, it didn’t. And ever since then, this seven dollar check has been hanging out in MoneyDance waiting to be reconciled.

Over the weekend, I decided to ask the bank how best to handle this. At this point, I’m pretty sure that this check has been lost and/or forgotten, never to resurface again. Nonetheless, I wanted to check with the bank before completely forgetting about it.

Since I was already logged in, I clicked the “chat” icon in the Bank of America web interface and was soon connected with Jonathan. I explained the issue and this was his answer:

“Check are good for 180 days (unless otherwise noted), so if the check came from your personal checkbook, it would be void by now.”

That’s about what I figured, but I wanted to be sure, so I asked if he was 100% sure that Bank of America would refuse payment of the check if it ever resurfaced and got deposited. His reply:

In fact, under the Uniform Commercial Code, banks in the United States are not legally obligated to pay checks older than six months (link). Of course, this leaves some wiggle room. Your bank may not be required to honor an old check, but they might choose to do so. You would thus be well-advised to check with your bank before ignoring an old check in your register.

Since it’s such a small check, I’m not worried about it showing up in the future and causing an overdraft. It is, however, possible that we’ll eventually close that account and that the check will subsequently re-surface. I thus printed a pdf of the conversation and dumped it into Evernote on the off chance that I ever need proof that I was told the check was void and wouldn’t be honored.

For the record, I would happily write a new check if I could figure out who to pay. Unfortunately, the school was just a pass-through entity in this case, and the money was ultimately destined for someone in the classroom. Thus, we have no idea who we owe.

27 Responses to “How Long are Undeposited Checks Good?”