It’s still early April and the national average for a gallon of regular unleaded gas is just shy of $4/gallon — up $0.17/gallon from a month ago. This begs the question… Once the summer driving season hits, how high will gas prices go?

For the record, as I write this, the lowest reported price in the country is $3.12/gallon in Parlin, NJ and the highest price is $5.79/gallon Death Valley, CA (source). Today, I paid around $3.85/gallon. 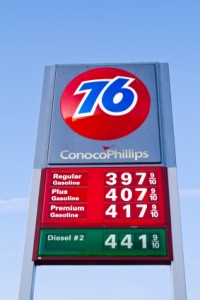 At the same time, others are saying that gas prices will once again spike this year, but will fall short of the all-time records. For reference, gas prices surged last spring but then moderated over the summer.

Whether gas prices end up going pretty high or really high, a major concern is what impact the price of gas will have on our fragile but recovering economy.

According to a recent Gallup poll, gas prices would have to rise to somewhere in neighborhood of $5.30/gallon before the average American would significantly reduce their spending in other areas or otherwise change their lifestyle.

What do you think? How high will gas prices go during the coming year?

Please also share in the comments your thoughts about how high gas prices would have to go for you to make significant budgetary (or other) changes — assuming that we haven’t already crossed that point.

11 Responses to “How High Will Gas Prices Go?”