This post is from new staff writer William Cowie.

Visa evidently thinks prom spending is significant enough that they’re spending money doing an annual survey about how much people are going to spend on proms.

Recession, schmecession, prom spending is expected to set new records this year. Check out the chart below: 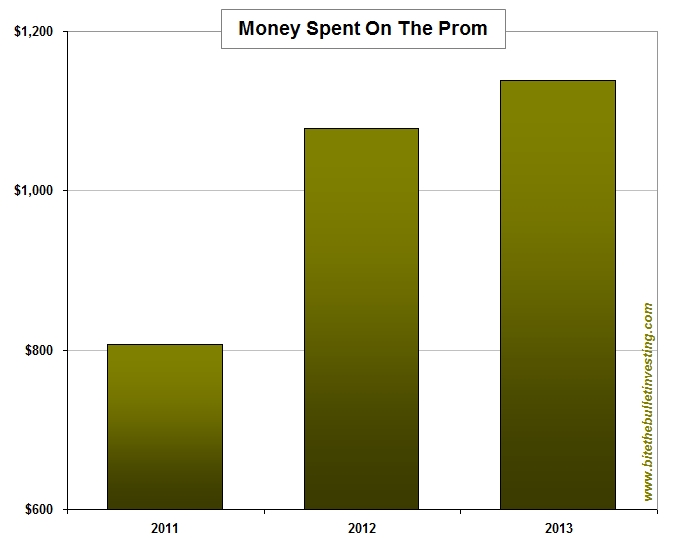 If 40 percent over two years is not inflation, what is?

The prudent ones among us, who routinely budget for planned expenses, would have had to put away close to $100 per month for the past year to pay for this year’s shindig. How much will it be next year?

However, something tells me that saving ahead of time is probably not happening all that much. What gives me that idea?

Clue #1: Credit card company survey sponsor. Do you think Visa would spend good money reporting on something people bought for cash? Out of interest I Googled “Visa survey on grocery spending” and came up empty. Think about it: if you made your money from people incurring debt, would you be interested in a class of spending that in most cases does not involve debt? Me neither.

So, what are the chances that the higher spending by lower income earners is funded with credit card debt? Pretty high, I suspect. (Visa didn’t disclose that percentage, but in the past month they launched a new smart phone app, Plan’it Prom, to, well, you guessed it, plan out the prom, 21st century style.)

So, not only is the spending on prom nights rising to record levels, but it probably is funded by a disproportionate amount of debt.

According to Kit Yarrow, a consumer research psychologist,  “prom is the new wedding.” When you look at where the money is going, it’s easy to see her point.

The big-ticket item is the dress or the tux. Some will spend upward of $300 on a dress, worn one night, although that probably wouldn’t be the average.

Then there’s the venue. The school hall doesn’t cut it any more. (Wait, you mean there are actually people who once had their prom in a school hall?)

Well, how are you going to get your fancy bottom to said fancy venue? In a fancy limo, of course. Maybe a party bus? Borrowing Dad’s car to take your date to the prom and having her back in her parents’ home by 11pm is so… hey, did they even have a century when people did that?

So, once the well-dressed young adult has arrived in stylish wheels to the fancy venue, how can you just end right there? And so the after-party was born.

I didn’t mention the pre-prom tan, because I just couldn’t bring myself to do that. The prommers apparently do it, though. Add it to the tab, Dad.

Those among us who are older are no doubt aware that prom night has always been an important event. But important didn’t always equate to spending at this debt-inducing level. Why, then, has prom spending skyrocketed?

Perhaps a form of peer pressure (“C’mon, Mom, I don’t want to be the one left behind!”) is partly responsible for ballooning prom budgets?

However, the stat mentioned above which shows single parents outspending married parents two to one makes one wonder if prom night isn’t some attempt, conscious or unconscious, by a parent to have a “do-over” to recapture the romance of a time with no responsibility beyond being home at a certain time.

Or could it be that the recession is over and any occasion to step out and celebrate is a welcome distraction from the hard times we all went through?

By far the most troubling thought to me is that this one night will be the highlight of a young adult’s life. Can that be? Is there nothing better in someone’s future than prom night? Isn’t that just the most depressing thing you heard all year?

Why do you think prom spending is rising so quickly? Especially among those who seemingly can least afford it?

How do you feel about the level of prom spending? Do you feel it’s getting out of hand, or is this just part of the new normal? What do you feel is a reasonable budget? How much of that budget should the parents pay for?

More importantly, what advice would you give to parents with teens getting ready for prom night?

6 Responses to “How do you combat prom inflation?”