Not long ago, I wrote about net worth vs. net investable assets, and the circumstances under which you might want to track one or the other. While I’m generally most interested in the latter, as that most accurately reflects our progress to “financial freedom, ” I’ve begun to come around on the value of including your residence in net worth calculations.

Part of my change of heart on what flavor(s) of net worth is/are worth tracking has to do with the fact that we’ve recently been thinking of building an addition on our home, and it struck that it would be silly to treat an investment such as that as (essentially) a debit when we’d actually be increasing the value of an asset. Sure, it won’t be as liquid, but it’s not like that money would totally disappear.

Anyway, when I wrote that article, I mentioned that we have Quicken data going back to January 1, 1997 and that I was thinking about putting together a historical retrospective looking at our net worth against time. Well, I’m pleased to report that I finally got around to doing just that. And guess what? It’s pretty instructive…

What follows is a table showing the annual and cumulative change in our net worth on a year-by-year basis from 1997 through present. Note that, while I included the value of our home (minus what we owe on it), I didn’t include the value of our cars. While the year-to-year numbers jump around a lot, especially early on, you can definitely see a general upward trend emerging over time.

To be honest, I’ve never really tracked this sort of stuff all that closely in the past, and when I first started putting this table together, I was a bit underwhelmed. The main reason for this is that I initially included just the annual change data, and didn’t add the cumulative change column until. But once that was in place, the effects of compounding really jumped out.

Since a picture is worth a thousand words, I thought I’d go the extra mile and construct a graph from these data. What follows is a plot of our “relative net worth” starting with $1 on Jan. 1, 1997 and proceeding through this month. 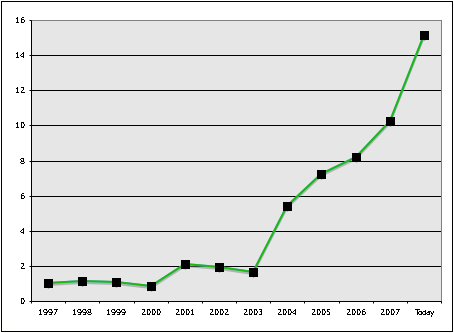 As you can see, it’s been a pretty consistent upward march, and for every dollar that we had on New Year’s Day 1997, we now have more than $15. If you do the math, this works out to an average of 29.5% annual growth. Admittedly, this includes a good bit of generosity from family at some key points during the lean years early on, though it also covers a period of time during which we went from zero to four kids.

22 Responses to “Historical Net Worth Numbers”