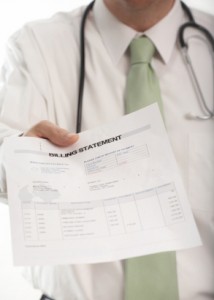 I spent yesterday at the hospital. Don’t worry, it sounds a lot worse than it was… Our oldest son had to have his tonsils and adenoids removed, so my wife and I were camped out in the outpatient surgical center for the better part of the day.

In the end, everything went smoothly, and he’s on the road to recovery. But this isn’t a parenting or medical website. This is a financial website. Thus, I thought I’d talk a bit about the financial side of such things.

As you know, we’ve been participating in my employer’s high deductible health plan for the past couple of years. In other words, we’ll be facing a whopping bill once the dust settles. Actually, it will be multiple whopping bills… The hospital, the doctor, and the anesthesiologist all bill separately. And then there will likely be some lab tests, etc.

The good news is that we’re protected on the upside by our $3, 000 deductible. The bad news is that, since it’s January, we’ve paid almost nothing toward it thus far, so we’ll be paying that out-of-pocket. In our case, that really just accelerates the inevitable. With four kids in the house, we usually hit our deductible bill mid-year whether or not we have a major medical procedure.

But still, a $3k medical bill to start the year is something that could really set a lot of people back. Fortunately, we have short term cash in the bank, and we also having a well-funded health savings account (HSA) in case we need it.

Truth be told, we’re planning on continuing to use our HSA as a tax-advantaged investment account, so we’ll be paying for this from other sources. But if we weren’t, we could always fall back on that HSA.

As I’ve noted in the past, the lower premiums of our particular health plan more than make up for the higher deductible. But if we hadn’t been planning ahead, a relatively major medical procedure could’ve created a short-term cash crunch. If you’re considering a high deductible health plan, just be sure that you’re aware of, and prepared for the worst case scenario.