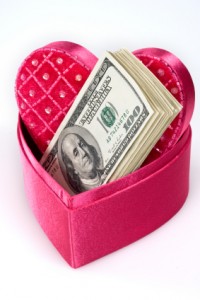 Consider Valentine’s Day. Is there any holiday known to man and woman that brings into greater conflict the heartstrings and purse strings?

You want to express your inner most feelings for your sweetie in the gift you choose, but doing so may require you break the bank. And that could be counter-productive. Who wants a penniless pauper as his or her main squeeze?

For men especially, this month-two, day-14 Catch-22 delivers such a load of anxiety that they may not recover until just before Sweetest Day, when it explodes in their faces all over again. I’m betting if they’re like me, many men would prefer having the decision taken out of their hands by an authority better versed on the topic of giving meaningful gifts while respecting a budget.

Fortunately, just such an authority exists to help you.

In fact, regardless of your gender, you have an ally and invaluable aide in Vickie Oliver, author of “The Millionaire’s Handbook: How to Look and Act Like a Millionaire, Even if You’re Not!”

Oliver is out with her list of “Valentine’s Day Gift Ideas for the Frugalista, ” and we’re assuming though frugalistas would seem to be women, men can partake of a few of her Valentine gifting ideas themselves.

Writes Oliver: “If you’re watching your money (and these days, who isn’t?), the good news is we live in an era when the grand gesture can be more meaningful than a present costing hundreds of dollars. With a little forethought, yours will convey just the right amount of love.”

One option, Oliver says, is to create a drink personalized to the distinct nature of your sweetheart. If he’s from Florida, include orange juice. If she’s red-haired, make sure ginger is one of the ingredients. Create a name for the drink, and a recipe card your honey can carry home to make the drink any time.

Another is to design an I.O.U. for something you know your significant other would love, and wrap it with a ribbon from another gift. It might be a “free home-cooked meal, ” or “one free backrub.” Writes Oliver: “Whatever the promissory message, it should be for something that you know your love interest greatly enjoys, but doesn’t have the chance to experience nearly often enough.”

One idea of Oliver’s I particularly like is to create a CD of the songs your honeybunch likes, or that will remind you and that special person of memorable moments during your time together, whether it be a season or a lifetime.

“If you have been dating for over a year, the songs might hearken back to the night you met, ” Oliver writes. “Or the CD might include the melody that played when you first kissed. Sweet dreams are made of this.”

For the über tightwad

Inspired by Vicky Oliver, I compiled my own short list of Valentine gifting ideas, perfect for folks who would make a frugalista look like a philanthropist by comparison. Let’s see if a few of them don’t appeal to the cheapskate in you. I emphasize these are my ideas. No one else would have the gall to claim them.

Weekend in Paris. There’s no place more indelibly linked with romance than the City of Light. But you don’t have to travel to France to rub shoulders with Parisians. There’s a Paris, Oregon, a Paris, Texas and a Paris, Illinois, as well as towns called Paris in Missouri, Kentucky, and Tennessee, to name a few.

Greyhound can take you to these towns or within short distances of them, but you don’t have to live that extravagantly. Simply hang out your thumb on any highway headed toward a Paris, and if luck is with you, you and your sugar pie should get there. Thumbing a ride worked wonders for Claudette Colbert and Clark Gable in “It Happened One Night, ” one of filmdom’s great romantic flicks.

Dinner next to the fire. Nothing says “I love you” like romantic chit-chat and dinner next to a crackling fire. At the city dump, you’re likely to be able to find an old metal barrel. Fill it with combustibles and set them ablaze.

Look around and you may be able to spot an ancient, beaten-up couch, or maybe a discarded loveseat. Draw it up to the fire, sit down with your heart-throb and get going on some serious turtle-doving, while digging into the sack of chalupas you brought from the nearest Mexican takeout.

Romance of the rails. Long ago, train travel took on a kind of romance it’s never shed, even after being supplanted by air travel in most folks’ plans. Great American songs like “Chattanooga Choo Choo” and “Atchison Topeka and the Santa Fe” did much to cement this mystique.

So plan to make this the year you take your darling on a very romantic train ride. There’s no need to pop for a ticket, though. Rail yards in any major city are filled with boxcars, and one with open doors could be the portal to adventure and romance for the two of you.

Nod off to sleep after the train that includes your personal car starts rolling, there’s no telling where you and schnookums might wake up.

Why, it could be Paris, Ohio.

2 Responses to “Heartstrings and Pursestrings”