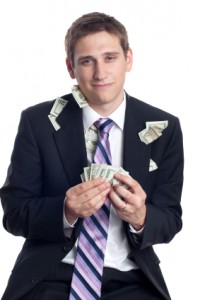 This is a guest post from Darwin of Darwin’s Money. If you like what you see here, please consider subscribing to his RSS feed.

As the economy struggles to recover, 2011 promises to provide opportunistic consumers and businesses with plenty of surprise bonuses. You just need to be ready to take advantage of them! Here are just a few unique opportunities presenting themselves this year – surely, you can benefit from one or more:

As part of the compromise over the extension of tax cuts into 2011 and 2012, the payroll tax will be reduced by 2% for all working Americans. Typically, American workers have to pay a 6.2% payroll tax into Social Security on income up to a specified level ($106, 800 this year). In 2011, this tax will be only 4.2%, so you will have an additional 2% back in every paycheck for a maximum of $2136 for workers earning up to the cap.

A simple and effective way to put this money to work for you would be to increase your 401(k) or equivalent retirement account contributions by the same 2%. Other uses could include paying down high interest debt or building your emergency fund. Whatever you do, don’t squander this year’s unplanned bonus. The government wants you to spend it to help stimulate the economy, but you can put it to better use.

No FICA cap increase 3rd year in a row

Here’s another stealth bonus this year for high earners… The cap I mentioned above has not been raised for the third straight year! Typically, it goes up every year based on an inflation calculation. Even though we all see inflation in food, energy and healthcare costs, the government’s index if flat.

Conspiracy theories aside, this official lack of infation has resulted in the $106, 800 cap being in place during 2009, 2010, and now 2011. If and when you hit the cap in annual earnings, you’ll get a fatter paycheck.

Rather than squandering and spending that several hundred dollars that extra money that shows up in your paycheck toward the end of the year, put it to work! Treat it like a bonus! Because chances are, by 2012, that cap will finally move.

While decades low interest rates are terrible for savings accounts and CD rates, they’re a boon for people looking to borrow money to buy a house, refinance their existing debt, or grow their business.

Just because rates are low, however, doesn’t mean it’s a great time to rush out and buy a home. But for those who were already looking to take the plunge, you may never see mortgage rates like this again in your life. Likewise, if you have an existing mortgage and haven’t already refinanced, refinancing into a lower rate loan can save you hundreds of dollars per month for decades to come.

Rates won’t stay this low forever – in fact, they’ve already increased a bit from their all-time lows – so it’s worth considering whether a home equity loan, mortgage refinance, or new home purchase makes sense at these low rates. If you wait, you’ll almost certainly pay more.

Incredible talent available at a discount

While some businesses are intentionally avoiding hiring the unemployed, and only seeking candidates that are currently employed, I find this to be somewhat backwards. After all, an already employed worker will have a good bit of negotiating leverage, and you’ll wind up paying a premium relative to their existing salary, and possibly have to provide relocation benefits.

At the same time, someone who’s unemployed has very little leverage, may very well be incredibly eager and enthusiastic to get back into the workforce, and may turn out to be incredibly loyal to you and your company for giving them a shot during such a trying time.

In past downturns, talent and/or performance may have played a major role in layoff decisions, but this time around companies have shed large numbers of workers, if not entire business units. You can find top talent, experienced veterans, leaders, and innovators out there just waiting for a job offer. As the economy picks up, these people will be employed again – pick them up before your competition does!

Other beneficiaries of the recent tax deal are American homeowners and manufacturer of energy efficient appliances, windows, and doors. As part of the 2011 energy tax credit program, homeowners will be able to deduct 10% of the cost of compliant home upgrades (up to a $500 total deduction) from their tax bill in 2011.

Granted, this program isn’t as attractive as it was in 2009 and 2010 where you could deduct a full 30% up to $1500, but if you were considering replacing some windows, your HVAC system, or other features of your home anyway, you might as well do it this year and recognize the credit in 2011.

As Congress hunkers down and tries to reign in spending following multiple stimulus packages, bailouts, and tax cut extensions, it’s unlikely that we’ll continue to see stimulus tax credit programs like these. In other words, take advantage of them while you can – if you can justify it financially.

These are just a few special bonuses presenting themselves in 2011. I’ll be enjoying a few.

Did I miss anything?