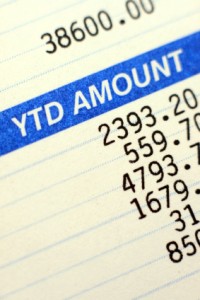 In the past few days, I’ve heard from several readers who noted that their federal income tax withholding has increased in 2011 despite the fact that 2011 income tax rates will be unchanged from 2010.

It’s also important to note that, the Payroll Tax Holiday is a separate issue entirely, and it affects a different line on your check stub. As I noted above, this affects your Social Security taxes, which are typically listed as FICA-OASDI on your check stub.

While the Payroll Tax Holiday went into effect on January 1st, the IRS has given employers until January 31st to implement the changes in their payroll systems, with an expectation that any over-withholding be rectified by the end of March.

So… If you’ve seen an increase in federal income tax withholding (or failed to see a decrease in Social Security withholding), you now know why.

186 Responses to “Federal Income Tax Rates Went Down but Your Federal Tax Withholding Increased. Here’s Why…”