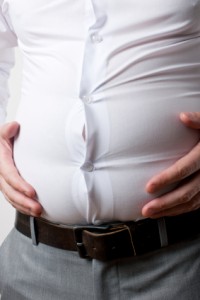 This is a guest post from Stathis Papas, Ph.D.

A study conducted at the University of Mainz in Germany has shown that over-indebted people are more than twice as likely to be obese as their financially stable counterparts. Dr. Eva Munster, who led the study, defines over-indebtedness as the inability to redeem one’s debts due to an insufficiency of income to meet the cost of living, even after a substantial cutback in the standard of living.

The number of people in high-income countries who meet the definition of being over-indebted has risen dramatically since the beginning of the worldwide economic crisis. In Germany, approximately 7.6% of households are currently over-indebted.

Can debt affect your body weight?

The purpose of this study was to measure the health standing of individuals who are over-indebted by comparing the results of two surveys. The first survey was conducted by telephone and included 8318 respondents that were representative of the general population.

The second study took the form of a questionnaire that was presented to the customers of debt counseling centers, resulting in 949 over-indebted people responding to the questions. Both studies obtained information about smoking behavior, body mass index (BMI), depression levels, and the socio-demographic parameters of sex, age, income and education.

Gender was found to play no role in over-indebtedness, since both men and women were equally likely to be indebted. However, among over-indebted participants, there were several common characteristics: compared to the general population, over-indebted people were on average younger, had lower income and education levels, consumed more tobacco on a daily basis, and exhibited greater depression levels. One of the most interesting findings from the survey was that the over-indebted individuals were more than twice as likely to be obese.

The link between debt and obesity

Previous studies have found a strong link between poverty and obesity. Scientists have suggested that this relationship is primarily due to an inability to afford healthy food. There is an inverse relationship between calories and cost: high calorie foods are less expensive and low calorie foods more costly. This leads people of lower socio-economic status to consume high calorie, fatty foods rather than healthier alternatives.

Although people of low socio-economic status may not have access to healthy food, they may still be able to meet their monthly financial obligations. Over-indebted individuals, however, have debts well beyond the simple cost of living, which is why radical cutbacks in the standard of living may still leave them unable to meet their debts.

In addition to not being able to afford healthy food, the over-indebted person is more likely to suffer from psychological distress. This accounts for the increased smoking behavior. Similarly, depressed emotions can lead to overeating, known as a hyperphagous reaction, which provides short-term positive feelings and gratification.

Over-indebtedness was also found to aggravate certain risk factors for chronic diseases. For example, leisure activities tended to be more sedentary in nature. Over-indebted people were also found to be more likely to lapse into unhealthy behaviors, such as smoking and over-eating, even though they knew the behavior was harmful.

Implications of the debt-obesity link

In Germany, one out of every three residents can be classified as obese. This has given the nation its reputation as Europe’s fattest country. The German government has begun an anti-obesity campaign in an attempt to reduce Germans’ waistlines. The new study provides additional ammunition that can be deployed in eradicating sociological factors that lead to obesity.

Unfortunately, obesity rates in America are similar to those in Germany. In the United States, roughly one out of every four people qualifies as obese, and the number is expected to rise. If the German study’s results are found to be applicable to other countries, the link between over-indebtedness and obesity is cause for concern, as record numbers of Americans have been filing for bankruptcy.

The United States is “obesogenic”

Obesogenic is the word used by the CDC (Centers for Disease Control) to describe the United States. This means that society itself sets the stage for obesity. Government policy, in particular the congressional farm bill, subsidizes fattening foods, making them more affordable. The nation’s workers are increasingly sedentary and the car culture encourages driving over walking.

Could the newest obesogenic factor in American society be over-indebtedness? If yes, then in this country racked by record levels of personal debt, the obesity rate is set to skyrocket.

The findings of the Mainz study suggest that over-indebtedness is a risk factor for obesity. But the opposite could be true as well. Compared to normal people, obese individuals may be less successful as job prospects because of the social discrimination they face and their own psychological barriers (negative body image).

New studies will be required to determine the direction of the causality in the obesity-indebtedness association and whether these two are linked inextricably. If the premise that becoming over-indebted leads to weight gain is accepted, the next question will be whether losing weight could improve one’s financial prospects.

About the author: Stathis Papas, PhD is a research scientist who follows health trends in obesity, diet, and weight loss, and their relationship with fluctuations of the global economy. He runs Weight Loss Triumph, where he shares information about popular weight loss programs. His site currently features articles on weight loss programs including Medifast and Nutrisystem.

5 Responses to “Debt and Obesity – What’s the Connection?”