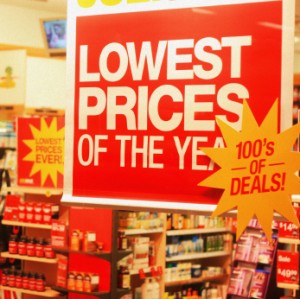 When you walk into a grocery store these days, you’ll encounter a bewildering display of promotions. In most cases, these promotions involve some kind of collaboration between the grocery store and the manufacturer.

Most promotions involving particular brands are funded by the manufacturer, so your local retailer is not really losing money. In fact, in many cases the brands pay some kind of promotional fee to the store for special attention, such as placement at the end of an aisle (the “end cap”).

Regardless of the motivations of the manufacturers or retailers, the promotions often mean serious savings for the customer. But it helps to understand what’s going on behind the scenes. Here is the rundown on four common promotions.

This common promotion presents some seriously good deals for the shopper. Called BOGO in the industry, the buy-one-get-one promotion is common in impulse items such as ice cream. Why not BOGO staples? Because the manufacturers and retailers know that you’re not going to buy two loaves of bread if you only need one loaf — few people are suddenly going to eat two sandwiches at lunch instead of one just because they got a good deal on bread.

But ice cream? If you have two cartons in the freezer, you might eat two bowls in one sitting, because it tastes great and the second bowl was essentially free! Manufacturers offer BOGO on impulse items because they want you to buy more, and get hooked on their brand. For the buyer, it’s a good deal if you really are going to consume double the item; but in the long run it might not be such a good deal if you develop a two-bowls-of-ice cream habit!

2. Buy This, Get Cents Off on That

This promotion is designed to prompt shoppers to buy related items, such as charcoal and steaks or wine and cheese. These deals are usually not as tempting as BOGO, but they do make shoppers think about related items, which is the goal. For the shopper, this could be a good value if you really need the related item. Otherwise, the deals usually aren’t good enough to warrant the extra purchase, especially since they typically involve the brand-name items, which are more expensive than the store brands.

In our local chain grocery, Progresso Soup is sometimes offered at $1 off per can, which means some varieties cost only 99 cents. That’s a seriously good deal. How does Progresso afford this promotion, and why don’t they just lower their everyday price? (Progresso is the typically the most expensive brand of soup in our local store.)

Here’s the thinking behind these types of deals: General Mills, which owns Progresso, knows their premium soups cost more than the others, so one way to get people to try their soups is to offer a serious cents-off deal. Their soups are good — in fact, in my family’s opinion, better than the competition — so they expect that a certain percentage of buyers who try them at the lower price will become regular buyers and stick around when the deal is off.

They don’t reduce the everyday price because, in the long run, they want to have buyers paying more. For the consumer, the big discounts are an excellent short-term deal. In my household, the promo did precisely what General Mills hoped — we only eat Progresso Soup now, even when it’s not on sale (though we buy less when it’s not). But a smart buyer who values the savings over the preferred brand can almost always find one of the big brands on big discount.

Coupons serve much the same purpose as other offers — manufacturers hope you try their product at the coupon price and become hooked. The coupon offers another benefit for the manufacturer — it tells them which media is getting the most attention.

For example, if they put one coupon in a series of local newspapers, one in a national magazine, and another on a popular website (and ask shoppers to print it out), they can tell by the response which of the three media worked better. As with other such deals, coupons are a value to the consumer if she really needs the item; not so much if it’s going to sit in the pantry for six months!

Grocery stores are full of values and potential landmines, and knowing a little about the lay of the ground before you enter will help you make the most of your shopping trip. Happy shopping!