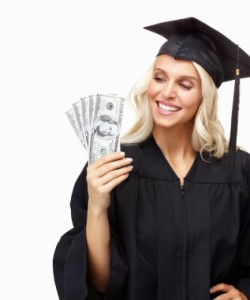 We’ve talked in the past about how much your college degree is worth. Given the current economic environment, especially as it relates to employment opportunities (or lack thereof), I’d be willing to bet that many recent graduates are second guessing their decision to lay out the money required for a college degree.

According to a recent study from the Brookings Institute, however, higher education is a better investment than the alternatives, even for the “Class of the Great Recession.” Really? Really.

Jumping ahead to the punchline, the study concludes:

On average, the benefits of a four-year college degree are equivalent to an investment that returns 15.2 percent per year. This is more than double the average return to stock market investments since 1950, and more than five times the returns to corporate bonds, gold, long-term government bonds, or home ownership. From any investment perspective, college is a great deal.

Breaking down the cost of college

So how much does college really cost?

Considering both public and private schools, a four-year college degree costs an average of $48k. When you factor in the opportunity cost of not working during those years, the total rises to $102k.

On the other hand, if you pursue an associate’s degree, you can expect to spend an average of $5200. Adding in two years of missed work (ages 18-19) brings the total to $28k.

What should our hypothetical graduate do?

Note: This isn’t an entirely fair comparison, as the hypothetical associate’s student should have $102k – $28k = $74k left over for alternative investments, and the study doesn’t account for this.

What about the alternatives? Looking across the past 60 years, the stock market returned an average of 6.8%, corporate bonds returned 2.9%, gold returned 2.3%, long-term government bonds returned 2.2%, and housing returned 0.4%. All of these pale in comparison to the 15-20% returns associated with higher education.

It’s also worth noting that college is not a silver bullet. Not everyone is cut out for college, and there are likely to be major differences (on average) in socioeconomic status, innate ability, etc. between those who choose to pursue college and those who do not. It’s thus not entirely fair to ascribe the earnings advantage to the additional layer of education.

And, of course, there are the extreme outliers. I’m thinking here of those who never went to college (or who started and quit) but wound up making a fortune. See, for example, Bill Gates.

What do you think? Is college worth the cost?

11 Responses to “College as an Investment”