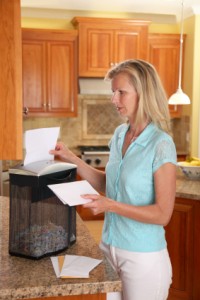 I’ve suggested in the past that you should think twice before writing a check to a complete stranger. After all, your checks contain both your account number and your banks routing number — exactly what someone would need to help themselves to your money.

This is especially troubling given the ease with which checks can be printed, as well as the fact that bank accounts don’t typically have the same level of fraud protection as credit cards do.

Well, guess what? Now that more banks are accepting remote deposits using photos of checks, you have reason to worry even if the recipient isn’t a crook. Think about it… They receive the check, shoot a photo for the deposit, and then what? Rip it up and throw it in the trash?

As evidenced by a recent story out of California, tearing checks up — or even shredding them — isn’t particularly effective when it comes to preventing fraud. According to detectives in Santa Clarita, a couple managed to steal a total of $16k from 20 victims by dumpster diving at a local self-storage facility.

The couple apparently managed to piece together hundreds of “partially shredded” checks. Once they had the account and routing numbers from these checks, they were able to print and use counterfeit checks that were drawn on the victims accounts. Yikes!

I’m not sure about you, but I run everything like this through a cross-cut shredder that produces tiny particles, pretty much ensuring that nobody will be able to piece things back together. But what about the people that you write checks to? How sure are you that they’re doing something similar vs. just ripping them up (or using a strip shredder)?

As if you needed more things to worry about… 😉

4 Responses to “Check Fraud: Use a Shredder — and Hope Everyone Else Does, Too!”