In case you haven’t been paying attention, bank failures are on the rise. Given this little tidbit of nerve jangling information, I’ve recently spent some time writing about the safest online banks, as well as the banks at greatest risk of failure.

With that as a backdrop, I though it would be interesting to take a look at the reliability of Bankrate’s Safe & Sound rating system, upon which my list of safest online banks was based. This is admittedly a very anecdotal account, but it’s interesting all the same…

For starters, just what is the “Safe & Sound” rating system?

So the system purportedly provides insight in the financial strength of stability of commercial banks in the United States. The star ratings work as follows:

The majority of banks fall into the 3-4 star range.

A closer look at a recent failure

So how does the system perform when it comes to predicting failures? As I said, this is highly anecdotal, but… On July 25th, First Heritage Bank, N.A. of Newport Beach, CA was closed down by the Office of the Comptroller of Currency, and the FDIC took it into receivership. So what did Bankrate have to say about all of this? Well… 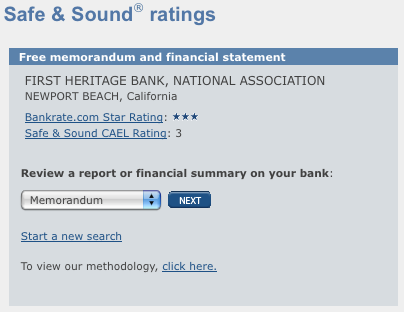 For the sake of comparison, ING Direct has a 3-star rating just like First Heritage, whereas E*Trade Bank, HSBC Direct, and Emigrant Direct all have 2-star ratings. The top online bank right now is Everbank with a 4-star rating.

The biggest lesson here is that Bankrate’s ratings can’t be viewed as an absolute indicator of bank health. While I have little doubt that the banks that they rate as being unhealthy are indeed unhealthy (e.g., IndyMac had a 1-star rating prior to their failure), it’s clear that an apparently healthy rating doesn’t necessarily mean that a particular bank is a safe bet.

It remains unclear (at least to me) whether this particular case was due to a flaw in Bankrate’s methodology (or the underlying data), or due to the fact that the Safe & Sound ratings are only updated quarterly — a lot can change in a few months. Regardless, this is just another reason that you should never exceed FDIC insurance limits, no matter how much confidence you have in your bank.

Hat tip to Sam for pointing out this article.

6 Responses to “Can You Trust Bankrate’s Bank Safety Ratings?”