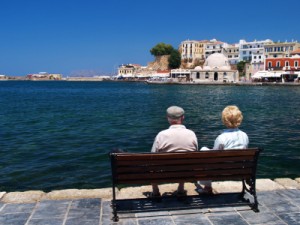 On a recent trip to Guadalajara, Mexico, our hosts announced one Sunday they were taking us to a special place outside the city. We climbed into a van and motored an hour southeast, coming to a halt on the shores of Lake Chapala.

Mexico’s largest fresh-water lake, Chapala is a picture-postcard-worthy gem rimmed by quaint and historic towns, and known for its awesome sunsets.

After strolling the sun-washed malecon, a promenade ribboning along the shoreline in Chapala city, we climbed back in the van for a lakeside joyride. We were soon in Ajijic, one of the most popular retirement towns for North American ex-pats in all of Mexico. Pronounced a-HEE-heek — possibly for the self-satisfied giggles of U.S. retirees — Ajijic has emerged as the spot for folks dreaming of retiring in a resort setting, but at a fraction of what they’d fork out in the States.

I can’t recall what our guide said it would cost per month to live in Ajijic with a gorgeous lake view and the services of a maid, but I do recall the stunned gasps of us Yanks when we heard the tiny sum that passed the guide’s lips.

The vast differential between the cost of retirement here and in not-too-distant foreign countries hasn’t been lost on Panama City, Panama-based author Kathleen Peddicord. She’s the author of How to Retire Overseas (Penguin, 2010) and How to Buy Real Estate Overseas (Wiley, 2013).

“This is the perfect time for North Americans to be thinking about living, retiring and investing in real estate outside the United States, ” she recently told me. “Many Baby Boomers about to become retirees are flat out worried they won’t be able to afford to stop working. And because American retirees are healthier than any before, they have a much longer retirement to pay for.”

While looking at more years in retirement, they’re also eyeing fewer retirement assets than they may have counted upon, she adds. “If they do the math as many people are doing, they’re saying, ‘How is this going to work?’ They answer for so many people is to look outside the box, and I’m speaking geographically. They might have considered Florida or Arizona in the past, but that’s not where they’re going to get the biggest bang in retirement.”

They need to look beyond North American borders, she says, and when they do it’s low cost of living that catches their attention. Options like Mexico, Panama, Ecuador, Belize, Nicaragua and Uruguay offer a good quality of life, for less.

“The point is to not have a lesser quality of life, ” she says. “Why do that? You don’t have to. After working all your life, you don’t want to spend the rest of your days just making do. And overseas you can live much better than you can in the United States . . . Once you take the first step and start to realize the possibilities, you realize that not only are you going to stretch your budget and live better too, but this will be a lot of fun and allow you a spirit of discovery.

“This phase of life, which could have been spent just sitting in a rocking chair, becomes the best part of your life. You’re free to embrace all this opportunity that is now before you. It’s just a big adventure.”

For brevity sake, let’s look at the nearest of the countries mentioned above. While a bit more expensive than the others, Mexico is a “turnkey option” for many North Americans, Peddicord says, and offers a more comfortable life.

“Ajijic is a good example, ” she adds, noting there are already so many retirees living there that there’s a ready-made upport system for freshly-retired newcomers. “But if you want a beach lifestyle, the beach community running north of Puerto Vallarta, which is called the Riviera Nayarit, is already well-developed. And it has a well-developed infrastructure, not only on a practical level of roads and communications and airports, but also from an amenities standpoint of golf courses, shopping, marinas and restaurants.”

The selection of beach condos is abundant, and all are dramatically less costly than on, say, the coast of California, Peddicord reports.

“Dramatically less expensive than California will be areas off the beach, and there are very interesting neighborhoods available. You can have a lifestyle very similar to the California coast in all regards, but especially in real estate.”

The clincher for many is the cost of health care. Depending on what country you retire to, the cost of health care can be 10 or 20 percent of what it is in the United States. Your U.S. health insurance and Medicare won’t cover you, but that needn’t stop you, according to Peddicord. “Good comprehensive health insurance can be gotten for $100 a month or less, ” she says.

Whether you buy or rent, the cost of real estate in that region of Mexico will be a quarter to a third of something comparable in California, she adds.

We were just about to wrap up our Skype-enabled conversation when Peddicord dropped a number that will lead to dropped jaws among many Americans.

“The average American Social Security check comes to about $1, 100 monthly, ” she says. “And there are many places you can live on that alone.”

For more information, pick up Peddicord’s books and also visit her website,  www.liveandinvestoverseas.com.

Then start packing your bags.

5 Responses to “Can you afford an international retirement?”