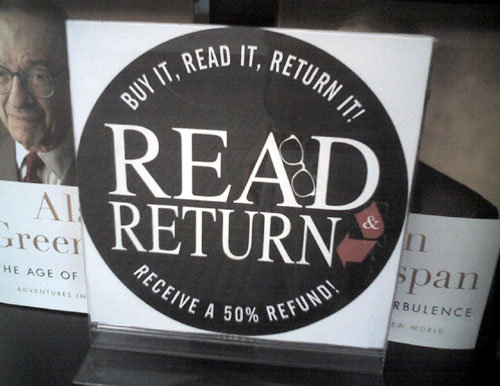 Curious as to what the “Read & Return” program was all about, I stopped to investigate.

In short, this is a program offered by The Paradies Shops, who run stores in ariports across the United States and Canada. The nuts and bolts of this program are that you can buy a book, read it, and return it (within six months) to any Paradies Shop (that sell books) at any airport for a 50% refund. This program covers all hardcover and paperback books that they sell. While this is the first I’ve heard of it, this program has apparently been around since 2003.

While this sounds like a decent deal on the surface, consider the following…

The last two books that I purchased, The Four Pillars of Investing and Your Money or Your Life, list for $29.95 and $15.00, respectively, and this is exactly what you’ll pay for it in an airport bookstore. Yet they can had on Amazon.com for just $19.77 and $10.20, respectively.

In other words, if you save your receipt, and if you remember to return your bookw within six months, you’ll end up paying slightly less than if you had bought it from a mainstream bookseller. Except that you won’t end up owning the book. In essence, you’re rolling the dice and hoping that you’ll pay nearly as much as the “street value” of the book to effectively rent it, with the alternative being paying way too much to own it.

Honestly, if you’re trapped in an airport with nothing to read, you’d be better off buying a newspaper.