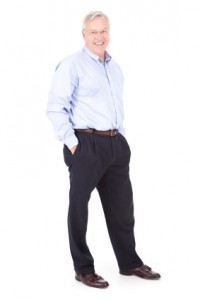 The American paradigm for decades was that you worked for an employer your entire life. Then at 65, you were feted at a retirement party, handed a gold watch by your boss, and sent off on a serene path into your Golden Years.

After 40 or 50 years savoring all the good things about work life — the satisfaction of challenges surmounted, the colleagues who turned into friends, the reassurances of a steady paycheck and a comforting routine — you were suddenly expected to love a new life of sleeping in, idling away long afternoons, playing a little golf, and trying to keep out of your spouse’s way.

Where once you’d enjoyed a built-in social network provided by your co-workers, the folks with whom you rode the bus or train to work, the waitresses at your workday lunch spot, your world now grew exponentially smaller — a first but significant shrinkage on the path to dwindling to the size of your deathbed.

No wonder there was another American cliche associated with the above. It involved the guy who, after retiring in fairly good health, suddenly dropped to the pavement, dead of a heart attack a few short years or months after retiring.

More recently, I’ve heard of a new standard replacing the old one. It’s being forged by retirees who, after learning that a life of golf games, grandkids, and gazing at TV didn’t match their retirement dreams, decided they needed to go back to work. Not necessarily for money, but for their mental health.

I’ve heard these stories over and over: The former watch repairman who returned to tinkering with timepieces three days a week, the barber who took over a chair in the very shop he’d sold years before, the retired construction tradesman who assumed the reins of the home delivery service at his sons’ eatery.

About seven years ago, I interviewed Dr. John Gorham, who started work at the Washington State University College of Veterinary Medicine in Pullman, WA right after World War II. When Gorham logged his very first workday, Harry S. Truman was in the White House, TV was in its infancy, and the Chicago Cubs’ last World Series appearance had come a few months earlier.

An awful lot had changed by the time of that interview nearly 60 years later. But one thing hadn’t changed. In 2004, Gorham, then 81, still came to work each day as a professor of veterinary pathology, just as he had since 1946.

“It’s because I like to go to work every day, ” he told me. “The people here are all 30 or 40 years younger than I am, and I get a kick out of being around the group. They’re after new research, and it’s just fun going to work.”

Turns out, Gorham was out ahead of the pack on this issue. Many folks today are realizing that spending the last years or decades of their life without ambition, challenges, or paychecks isn’t a particularly bright idea.

A few weeks ago, I spoke with Sara Rix, senior strategic policy advisor with the AARP Public Policy Institute in Washington, D.C. The topic: the merits of working longer. Today’s labor force is adding a lot of older people, especially those between 65 and 69, as folks delay retirement, or retire the retirement idea entirely, Rix told me. The rate of employment beyond the traditional retirement age has ballooned from 18.4% in 1985 to 31.5% last year. Among women, it’s actually doubled, from 13.5% in 1985 to 27% in 2010, Rix says, adding, “They like the social environment work provides.”

AARP’s Jean C. Setzfand puts it a different way. “Few people anymore see retirement as a time when they’ll put their feet up and do nothing, ” she wrote recently. “Increasingly, people expect to work past 65 or 67, even if their job is something completely different from the one they’ve done their whole lives.”

And the fact is, it’s a brilliant money move to work a little longer, AARP points out. “Remaining at work longer is an option for many of us, ” Rix says, noting the benefits of delaying retirement by even a few years means that many more years of savings, and that fewer number of years of financial outflow.

And that’s yet one more reason to consider working a little longer.

To give you an idea of the most advantageous age for you to take social security, and to learn the penalties for starting the flow of social security checks earlier rather than later, visit AARP’s new Social Security Benefit Calculator.

“Even a year of extra work makes a difference, ” Rix says. “People ought to look into the advantages of working longer. And it doesn’t have to be 10 years longer. It can be one, two, or three years longer.”

3 Responses to “Being Retired? That’s So Tired”