Here’s an email about marriage and money that I recently received from a reader:

I have a question about marrying someone who will go through bankruptcy BEFORE marriage. Other than having difficulty with getting a loan, what other effects should I expect in the future?

The bankruptcy had to do with a prior divorce, and ownership of more properties than one should own at any one time, so I’m not worried about his spending habits. What do you think? 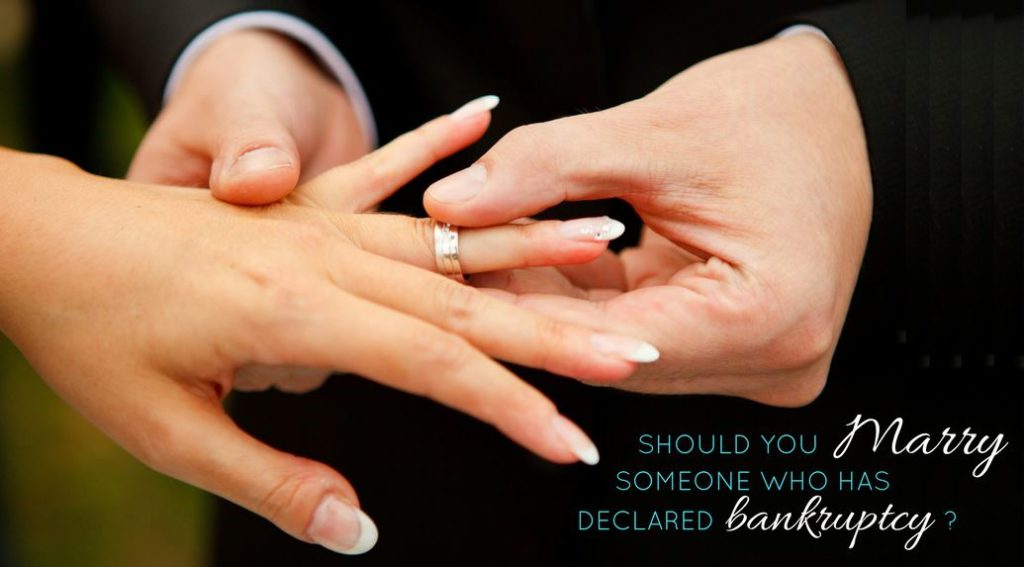 This is a great question, and needs to be addressed from two different angles.

There’s one major myth about a spouse’s bad credit history: that it affects your score.

It doesn’t. Your credit score is completely separate from your potential future spouse’s.

So, why does this myth refuse to die? Probably because spouses who choose to completely share finances often have overlapping credit reports.

Related: How to Combine Finances

If you’re both on the mortgage, the credit cards, and the car loans, those will all show up on both of your credit reports. So, unless one spouse also maintains personal lines of credit, the scores may mirror one another.

But your scores aren’t automatically linked just because you’re married. And you can keep your finances largely separate on an everyday level, as well.

Sharing Credit Could be Problematic

It’s pretty easy to keep your checking and savings accounts, retirement accounts, credit cards, and even car loans completely separate from your spouse’s. In fact, many couples take this route, especially if they come into the marriage with widely different income levels, assets, or money management styles.

In this case, however, it may be better to apply for a mortgage on your own. You’ll get a better interest rate than if you add your fiance’s bad credit to the mix.

Interesting Read: In Sickness and in Wealth: Why Today’s Couples Keep Separate Accounts

Other Problems with Sharing Assets

Maybe having to apply for a mortgage on your own isn’t a deal breaker. But here are some other situations where it may be better to keep your assets largely separate:

How to Protect Yourself

This isn’t to say that you should break off an otherwise great relationship. But you should take steps to protect yourself.

The best way to probably do this is to wait to tie the knot until his bankruptcy judgment is final. Then, you’ll know exactly what you’re getting into.

Related: Effects of Foreclosure, Short Sale, and Bankruptcy on Your Credit Score

If your soon-to-be-groom goes with a Chapter 13 bankruptcy, his debts won’t be discharged. He’ll still be paying them up after the bankruptcy is final. And even if he qualifies for Chapter 7, not all his debts are likely to be discharged.

Once the judgment is final, you’ll know exactly which debts he’ll still be dealing with. And you’ll know how those debts are likely to affect his take-home pay and ability to contribute to your household.

If you’re already living together, you should go ahead and consult and attorney now to determine if it’s possible to commingle your property while keeping you out of his financial mess. If he still has significant debt post-bankruptcy, having this conversation with a lawyer is definitely worth your while.

The Bigger Conversation to Have

Here’s another thing to think about: financial boundaries moving forward.

While some people file bankruptcy for reasons beyond their control, it doesn’t sound like that’s the case here. It sounds like your fiance has made some serious financial errors in the past.

Learn More: Take a Hard Look at Your Financial Habits — Are They Sustainable?

He likely overextended himself to purchase too many properties. And he failed to plan for the future.

This may not be a deal breaker, either. Especially if you think he’s learned his lesson. But you should be careful about letting him get involved in your finances until he’s proven himself.

Consider keeping your finances almost completely separate for a few years. Once he has rebuilt his credit and made consistently good choices, you can consider going the joint finances route, if that’s your preference. In the meantime, you should hold the reins on most of the major financial decisions for your family.

This will help ensure you know exactly what’s going on with your fiance’s financial life before you decide to tie the knot.

If you were in her shoes, what would you do? Would you consider marrying someone who is going through extreme financial difficulties, up to and including bankruptcy?

If you or someone you know is considering bankruptcy, here are 24 resources that may help you decide (as well as ease the process if you move forward).

18 Responses to “Bankruptcy and Marriage: Should You Marry Someone Who Went Bankrupt?”

Disclaimer: Because rates and offers from advertisers shown on this website change frequently, please visit referenced sites for current information. This website may be compensated by companies mentioned through advertising, affiliate programs or otherwise.
Personal Finance Tips - Copyright ©2005-2021 by FiveCentNickel.com. All rights reserved. - Terms of Service - Privacy Policy
About - Archives - Categories - Contact - AdChoices - Do Not Sell My Personal Information